Changed screen several times and my screen jumps and moves.

My iPhone 5 screen now jumps and moves erratically on its own. I have tried other screens and its definitely not them.

I cannot begin for the life of me what it would be ?

Any help would be much appreciated.

Anything to do with the proximity sensor guys ? Auto brightness doesn't work neither

"I have tried other screens and its definitely not them." Are you saying that the other screen work or that they do the same thing?

I smashed my Iphone 5s's screen, so when I replaced it started acting up, it moves by it's self... it's kinda freaky.

Juan Plays, the new screen may be defective or was damaged during installation. Try a new one.

If you are sure you are installing it properly, examine the screen connector on the board: is is damaged in any way? Any disturbed pins? Note that you could have damaged pins that are not visible except using very high magnification (20x-45x).

I'm experiencing this same problem with my iphoneX.

My iPhone 5 keeps jumping even writing this msg has been a problem.. It keeps skipping and going back and forth.. So annoying..what do I do?

Same problem with my iphone 6 plus jumping and keying by its own, like possessed!

I've read a few different forums, some say it's by not using the official Apple charger/plug...

(No luck-I use all Apple's chargers and not any 3rd party ones, and it still happens.)

>>The easiest but most inconvenient fix is that you have to take the phone out of its case.<<

I'm thinking that because the phone gets too hot, being inside a case the heat transfer makes the phone act up.

I have an iPhone 5s and I just thought it was my phone that did that. I never noticed the erratic scrolling right away as I tolerate random glitches to an extent. Eventually I got fed up with it after many nights of laying in bed just scrolling through Instagram and it would go all over the place and scroll back to the top.

I've had my phone for almost 3 years now, (waiting to upgrade) but I guess it still occurs with later gens of phones too.

It happens when your phone is charging WHILE you are using it. Unplug the cable and it works normally

Thank you for the tip.....Nawaal. I was just about to do a total reset of my phone when I found your comment--just unplugged the phone--la voila!

My phone is also acting up, it auto deletes characters of my password a couple times when I try to get into my phone. When i do get into my phone its almost like the screen is auto swiping to the other page or it wont swipe at all to a dif home page. Then when i go on snapchat, the phone glitches out and swipes back and forth or just wont let me type. Its an iphone 5s I would really appreciate a fix.

Hi there make sure this part black tape covering it on both sides if any of the electrical interference touchs underneath it or above will cause your problem.

Which part / black tape are you talking about ?

Is there any pictures you could provide ?

Cover it with black electrical tape as long as the Bare metal isn't touching anything other than the tape..

Install it and let me no if the screens work..

What screen do you mean I have the same problem to and I don't know what to do???

Yes sorry I thought I did lol 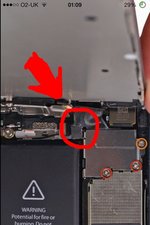 Thank you.. appreciate your prompt responses

Dont worry ive stole some off another spare screen I had. Why is the company I am buying these off shipping them without this tape on ? All my screen have bare metal connectors visible where you have circled the picture above ?

Its still doing the jumping :/ Any more ideas?

Major problem with non iphone chargers and accessories, unplug, restart, should fix it. Let me know.

Apple support has a very similar issue that has NOT been resolved either.

Remedy response on Apple' Support Blog stated the following solutions that did not work.

My issue is after my iPhone 5 phone rest awhile charging; when I first cut on my phone the digi screen issues occur.

Touch the digi screen anywhere and the screen can jump clear to other side of the screen.

Selects other screen options that where not selected by user.

Jumps around spastically like a muscle jumps in the body without cause.

If no resolve or update is found by Saturday.

Remedy: Unplug the iPhone 5 from the lightning cable charger. Thi apparently resolves the jumping screen issue.... At least for me.

My screen jumps when it's plugged in. I read the unplug the lightning cable comment and it worked like none other. Why does my acreen jump when it's charging?

Finally my iPod Touch works as it should!

I think it's an ios8 problem. I had it on my iPhone 5 on ios8 and the screen was jumping around. Had to live with it for nearly a year. Just recently updated iPad Air from iOS 7 to 8 and now the iPad is jumping around too, first when it was on charge. Didn't do that at all on ios7. Can't remember if my iPhone 5 did that when not on charge or shortly after one. It's very annoying though,

Imagine a complex electronic device with no way to recalibrate it... If ANYTHING is changed you're gonna have problems! Is it supposed to be self calibrating?

With all the posts i have seen about this issue it seems like this is an epidemic! I feel like there is more to this problem than apple is telling anyone...

thank you!!! This is exactly the problem I'm having with my iPhone 5c. When it's unplugged it works great! When it's plugged in it jumps all over the place and selects things I never selected and won't let me scroll down and zooms weird and it's sooooo frustrating!!!!! Thank you! I wonder if it's because I'm not using an Apple charger? It's like half Apple :) I'll try my other charger and see if that helps.

moewrigley, I just went from using a non-iPhone charger, to an actual iPhone charger and it did fix the problem! Thank you for thinking about that method!

im currently experiencing the same problem. i already tried all the ideas u suggested to fix it but sometimes it is still occurring. still pressing automatically and i cant even control it. so annoying

it takes me minutes to finish this comment bec of it

pls give more suggestion. i still dont have enough money to bring this into a technecian

BTW my phone is Iphone5s

I started to have the same problem with my Iphone X once I upgraded it to the latest version, some icons do not respond, and pictures in social networks are getting bigger or smaller on their own. Phone is literally is living its own life. It is annoying. What to do? Thank you

I've had my iPhone 5c for a couple of years now, no problems whatsoever , until a week ago, it's been possessed by the devil, it jumps all over the place, poens apps by itself, even my banking apps, this is causing me concern, I've had it looked at by a technitian and he tried a few things and basically told me to buy a new phone, it happens with the mac iPads too apparently ..!

It even mis-spells my words

Apple knows this is and has been a problem ALL along. Thus, the push for a newer models. Their prices do not justify their quality anymore. Not a peep out of Apple or any resolve , fix or bug corrections. Updates usually are to push more of their agenda. But Windows is even worse! ... They have endless “updates” which is code for updating ALL of your private information.

If you have replaced the screen with a new

one and it is still doing that weird thing then it could be be defective logic board as a result of accidentally dropping the phone.

Hello I have just singed up this is my first post