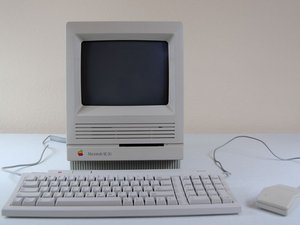 My mac whistles and does not boot.

Hi, I'm new here. I have an old Macintosh SE/30. I bought it second hand in 1995. Just recently, I brought out of storage and powered it on for the first time in 10 years. It worked perfectly. One day, I powered it on to try to remove some old files. I forgot to turn it off, and it was on for about 1 1/2 hours. I turned it off, and later that day, turned it back on. Instead of bonging and booting, the screen remained dark, and it made a pulsating whistle sound. I opened the mac up, and checked all of the capacitors, and, surprisingly enough, none of them had burst. I also restated the ram and rom, checked all the connections, and cleaned the analog and logic boards. There are no burnt/broken parts on either of the boards, or on the CRT, atleast, that are visible. The inside and outside are in perfect visual condition, and look as they shoud. The sound appears to be coming from the analog board, near the fan/flyback transformer. Unfortunately, I was not able to get a recording because it was to high for any of my cameras to capture it. It's a high, loud, whistling sound, and occasionally the fan would come on as well.

There are a couple of things that might be causing your problem. The first thing to consider is that over time, the ram could have unseated. I believe that older macs will sound long tones whenever they detect an issue with RAM upon startup. Another thing to consider is that these machines are notorious for having capacitors on their motherboard that go bad over time and swell up/leak. I would recommend taking the computer apart and reseating the RAM. While you're at it, check all of the connections from to and from the motherboard and also inspect the capacitors. iFixit doesn't have a disassembly guide for the SE/30 but this webside give a pretty good description and also offers some troubleshooting procedures. I can't stress how important it is to carefully follow the CRT discharge procedures highlighted on the site before doing any other work on the Macintosh. This picture gives a pretty good description of what bad capacitors look like also. If you see anything suspicions, feel free to post pictures and I'll give you any input I can.

at first i suggest you to recap completely logic board , even if the capacitors ( 47uF16 v) apparently look good i'm pretty sure they are gone ( if you are good with soldering is not so difficult )

Logic board must be washed very good ( with isopropyl alcool )after having take off old capacitors , then take a look to traces if you see broken and check continuity with multimeter

But if i understand it seems that you have also a problem with analogic board ( no fan , no video)

it should be important to check voltage ( maybe flyback transformer fail) or capacitors inside power supply are gone.

If you are resident in USA the best way is get in touch with Charles Phillips ( www.maccaps.com)

I suggest checking each system carefully