Does this iPhone Battery look Damaged?

I have just finished replacing my home button and speaker enclosure on my iPhone 4 (GSM), but I'm now beginning to have a charging issue.

The issue is that, the iPhone will not turn on. When ever it is plugged into a charger, it will only display the flat battery indication and the apple logo for roughly 10 seconds, then afterwards, it will turn itself off. (the phone by itself is unable to turn on, hence it is impossible to do dfu mode, powercycle or resets)

Initially, before the repair, the iPhone did not have any sort of charging/battery issue. which is why I'm speculating whether this is the problem or not.

As shown on below images, the battery appears to have slightly been punctured (during repair), but I'm not too sure if this is what contributes to the charging issue. 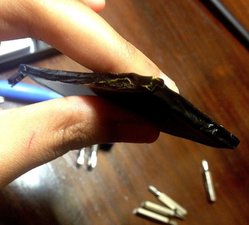 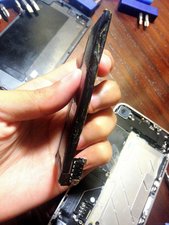 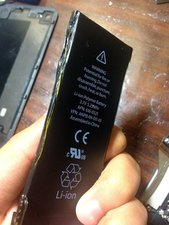 Otherwise, i may resort to contemplating whether the issue is caused by the prong connections on the motherboard or the dock socket. Here's the picture of the battery connector and dock socket connector (Which doesn't look damaged to me) 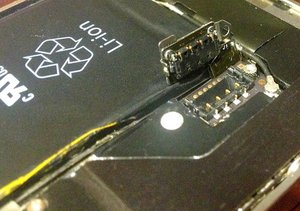 So before I try to order a new battery/any other components, I want to seek a bit of input from what people think may be the likely cause of the issue

All the signs turn to a faulty battery mate

Yeah, I found it quite weird that the battery was working fine before I take it out. The appearance of it was already like that even before I disassembled the iPhone.

But, I've ordered new battery and new dock connector (as you've suggested on my other thread). Hope it'll work, thanks for your input.

I too reconize this as a battery problem.

If you can fin a battery with similar part no. try it out.

Note that there are reports of different batteries to different iPhone 4.

Never heard of a iPhone 4 that needs the same battery part number..

All battery's for iPhone 4 are compatible with all iPhone 4