stuck on battery charging sign not booting into the OS

So i bought a retina macbook pro 13'' late 2013, the person said it had liquid damage and apple said that it would need the following things to get it working again

I bought it because i got it a bit cheap

so i took out the logic board and the ssd and cleaned it, SSD is fine, it works in my air, the LVDS connector on the board and the lcd was burned pretty bad, i replaced the whole lcd with a spare one i had, (has a little crack, i use it for testing), i wasn't expecting it to work but even with the burned LVDS connector ,the lcd lid up to the battery sign, i was very surprised.

OK, so the problem I'm facing now, is that the macbook only shows the battery sign when i plug in the charger, it doesn't charge the battery and doesn't have any light on the magsafe, so its stuck on the battery sign.

Any suggestions how i can fix this?, I'm good at soldering, i don't want to replace the board as its very expensive. 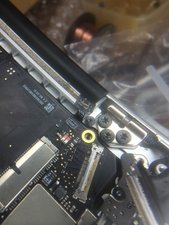 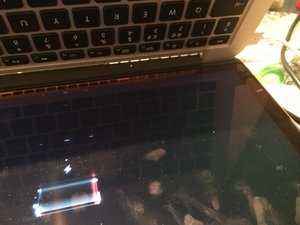 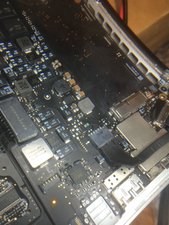 Start with a new DC-in board. Cheap and easy... might be lucky and have that solve your issue.

the power is going into the macbook, doesn't that mean that the dc board is fine?

Try downloading and running Coconut Battery to get a better idea of where you stand with the battery and charging. I agree with MacHead on replacing the adapter board, it's close to the LDVS cable and is a cheap try.

It won't boot up , just stuck on battery sign , I'll replace the DC in and see what happens