I dropped my XB1 down a flight of stairs and amazingly enough it still works, however one of the wires that connects the wireless module to the RF board broke, pulling the connector off of the RF board and the end on it was hanging on by a thread. The controller seems to use multiple communication methods so it still works, but only at close range and disconnects/reconnects often.

I ordered a new RF board and put it in the other day but the connector came off the end of the wire as well. I tried to thread it back in there and crimp it back on but I don't think I got a good connection as it is still giving me problems. I want to try re-crimping a connector on the end of the wire, but there is virtually no slack on the wire to do so. I think I might just be able to buy a new generic wireless card wire as the connectors appear identical to what you would find in a laptop, but not entirely sure. Does anyone know if there is anything special about that wire or would that be viable?

That should work just fine. The wire for the Xbox One is just like any other wifi card wire.

Another option would be to just buy the wire from Ebay or somewhere like that. Either way would work fine though.

Thanks, I'll give that a try and see how it goes!

I find that the best fix is to solder the wire on the board without the connector still in place. If you still have the first WiFi board you could use that one.

That has bin the fix for a handful of laptops, a ton of cell phones and a few modded routers. (for me) 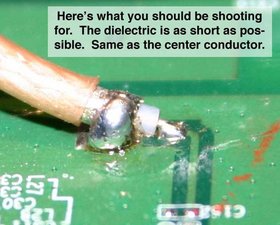 I am also in need of this wire do you know where i could get one and what they are called?