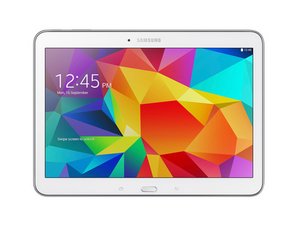 Menu and Back Buttons not Working After Digitizer Replacement

Hello all! Hope you're having a fantastic day!

So I recently did a digitizer replacement on a Galaxy Tab 4 10.1", the repair itself was very straight forward, almost seemed too easy (because it was). I put the tablet back together and the task manager and back buttons weren't working.

First off I thought this tablet was odd as it appears that the capacative buttons are part of the digitizer and not a separate flex as seen with most other galaxy devices. I thought this was very clever, it kept me from tearing those pesky thin flex cables that are always adhered to the lens.

I was very careful when taking this tablet apart as there wasn't any documentation available and I didn't want to rip what I thought would be those flex cables, so I was very surprised not to find any at all.

This is the OEM digitizer and lens: 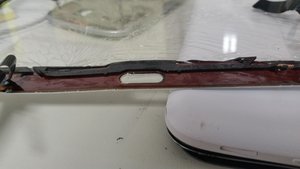 This is the one we received from sstparts: 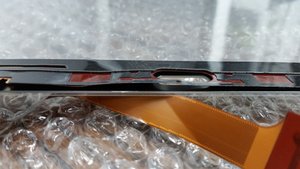 I didn't realize that what appears to be the digitizer/capacitive buttons are actually separating from the lens itself! This is clearly my issue as to why my buttons were acting all funky. I figured just sticking it down a little better would keep those two layers snug, but that didn't work, it only made it phantom touch all over the place.

So I added some double sided tape to hold the "digitizer" to the lens: 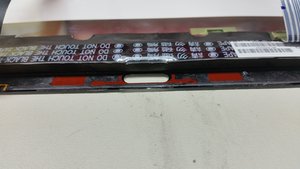 nothing... It works off of the device (occasionally) but every time I stick it back down it starts acting up all over the place.

So my boss has a clever idea, just add a little cushion behind the button: 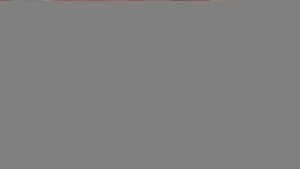 a little electrical tape later and now the button thinks its stuck down all the time.

So I took that off and I am completely out of ideas. This was one of the only suppliers we could get this part through, and even if we were to order another one there would be no guarantee it wouldn't come the same way. The digitizer itself works great! No dead spots, no phantom touching, very clear.

Thoughts? Suggestions? We really don't have any clue what to do....

Have a fantastic evening!

Did you ever find a solution? My screen was recently replaced and now is having the same problem so I brought it back to the repair shop and they are telling me that the button is worn out and they are ordering a new one. I'm questioning that because it's the back button and the recent screens buttons that are not working, i have to press really hard around the screen perimeter to get them to do anything, the home button works fine. I don't want to get charged for extra unnecessary repairs.

I dont know about this device particularly but on many Samsung devices these buttons are a separate piece or attached to a charge port, I would check to see if the cable that connects them is torn, it may need replacing!

This is definitely not the case with this device! I have confirmed that the buttons are indeed part of the digitizer and not a separate flex as on most Samsung devices, that is what I originally suspected as well! I know its wordy, but my post does explain this. Thank you for the suggestion though!