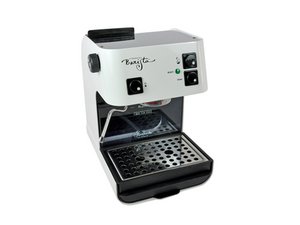 An easy to use home Espresso machine created by Saeco and rebranded for Starbucks. This machine is excellent for every day espresso drinkers and has an excellent build and product life.

My machine was over heating when I started it. Now it won't start at all. Any suggestions?

I'm a former owner of this machine's prototype by Saeco, called the "Rio Vapore," although I now use an espresso machine almost 10x more expensive. In any event, my Rio Vapore did exactly the same thing after a few years, leading me to replace almost every single part trying to get it to work, again. What I did not suspect at the time, since I was a relative novice to espresso machines, was almost certainly the cause of my machine's failure, viz., the boiler started overheating almost immediately after being turned on.

Turns out the culprit was a buildup of scale (calcium carbonate or magnesium carbonate from my having used our tap water. Although water utilities supply perfectly healthy, delicious water to our taps, that water often contains high levels of calcium or magnesium ions that are perfectly harmless to us, but through repeated refilling of boilers (espresso machines, steam irons, teapots, hot water tanks, etc.) with hard water, those minerals (calcium and magnesium compounds), can accumulate inside the boiler. The scale buildup on the inside surfaces of a boiler forms a kind of insulating layer all over, preventing the metal surfaces from dissipating heat properly, which causes overheating, which causes temperature shut-off switches to turn off power to the boiler heater.

If you're wondering whether your own tap water has a high calcium and/or magnesium content (referred to as hard water), you can buy little water hardness test strips pretty much all over (do an online search). Anything above about 3 grains of hardness is going to lead to problems with a boiler of any kind, over time. If you want a really quick and easy way to check out your own tap water, simply fill a saucepan with about a quart or two of fresh, cold water and boil it all away. If there's any white, powdery residue in the pan that's what builds up in your boiler.

To prevent limescale build-up from the start, you could use only pure, distilled water — though that's usually described as inferior to tap water when it comes to brewing coffee, because distilled water is tasteless. Another way to minimize calcification is to buy water whose mineral content has been removed by reverse osmosis treatment or by ionization. "treat" your water, i.e. by running it through a water softener. If you decide to use only bottled water, be sure to check its mineral content first. Water bottlers have relatively few regulations with which they must comply, so they often re-sell just tap ordinary, municipal tap water, with perhaps some charcoal filtering to eliminate any noticeable taste. Thus, even though you might pay more than a thousand times per quart than your water utility charges for tap water, it might contain as much or more ionized calcium or magnesium as your tap water!

To minimize the buildup of scale inside your machine's boiler, it's a good idea to stick to a regular schedule of descaling it. Again, you can purchase good espresso machine descaling agents online from many coffee macine dealers, even some drugstores. Tell you what: check out this Website for advice and instruction on decalcifying an espresso machine: http://www.wholelattelove.com/articles/d...

It may be possible for you to resurrect your own "dead" boiler if you can figure out how to force a strong descaling agent into it. Problem is, small espresso machines generally have small boilers which are one-piece and can't be opened for a peek inside. Also for a serious buildup of scale, you'd probably need to have an espresso machine repair shop do the descaling for you, because they can use a high-power cleaner that's much too aggressive (a.k.a. dangerous) to be sold on the open market. Trouble is, the cost for professional descaling can be greater than the value of most less-expensive espresso machines. Check out the price of a new boiler vs. a new espresso machine. If you do go with a new boiler be sure to descale it regularly.

Great explanation of the possible cause of this issue Bill, but I'm afraid the resolution isn't as simple as descaling. Once the machine has overheated to the point that it has no power it's either tripped the over-temperature fuse that's clamped to the boiler or it's ruptured the heating element, both of which require opening the machine and replacing parts. If you're curious, the Barista does have a 2-part boiler that can be opened, which is how you replace the heating element. Also all the shops I know of just use citric acid for descaling; there are no descaling products I'm aware of that are not food-safe.

These machines do not have a "power supply", they do however have a thermal fuse that will trip if the machine overheats. You can find it under a metal clip on top of the boiler; on Step 8 of the Barista Teardown it's on the left side of the boiler directly above the water inlet, with a brown wire leading to it, inside a clear protective sleeve. You can test it by putting a voltmeter at either end of it's wires (with the machine unplugged!); if it's open then it has tripped and will need to be replaced, if there's continuity then it's fine and you have a different problem.

Mine wasn't turning on. I opened it up and could see sparks coming from one of the connections on top of the boiler unit. The connection was loose and somewhat dirty. I sanded it down, hooked it back up, and the unit fired up like a champ! Try this before going down more complicated routes in my opinion.

EASY FIX on newer models: If you have the ‘no power’ overheat problem on the later version of the Starbucks barista, mine has an extra sensor directly over the water inlet to the boiler that looks like the others (brown plastic with two spade connectors).

Between the two metal spades is a brown plastic ‘button’ / tab poking up that can be pushed down firmly with a ‘click’ to reset the overheat trip.

Your machine should now work. Next you need to descale it!