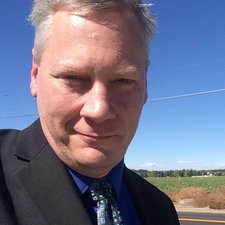 MBP Late 2013 won't power on after sitting for months

My MBP had a shattered screen which I was not able to replace for some time. So it sat for many months without being used. I was using it with an external monitor, but it went into some weird power save mode and would only turn on for like 2 seconds then turn off. It wasn't enough time for the external monitor to come on so I could never see what the issue was, even after disconnecting the battery and resetting the laptop.

SO, after many months of no use, I finalle putchased and replaced the screen, and I also had to replace the internal magsafe power connector and I had to purchase a new power supply because something happened to my stock power supply.

While I had it open, I accidentally broke one of the levers that lock down the ribbon cable next to the battery. But I shoved a piece of paper in there to get it snug but I'm not sure if it's snug enough... If anyone knows how I can order a new one of those, that would be awesome as I don't know what they are called. Here is a pic of where it goes: 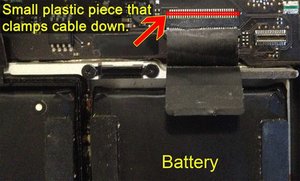 Anyways ... with everything put back together, when I connect the power supply, the light on the connector goes green for a quick moment, then goes orange. I have left it connected overnight and it never goes back from orange to green, so its obvious that the battery isn't being charged.

So I checked the voltages on the battery connector. The attached photo shows what voltage readings I am getting from the connector. I have no idea what they should read. Basically I'm getting 2 volts on some pins and 1.9 to 1.8 volts on some others. Here's a pic. 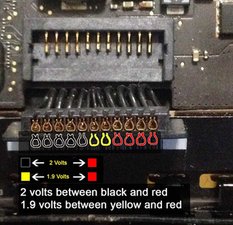 Does anyone know what that small plastic fitting is called - the one that clamps down on the ribbon cable?

Finally, if anyone has any ideas on what the problem might be, I would appreciate any feedback.

I changed the port in the MBP itself because it got ... messed up ... my fault, because the pins weren't connecting to my power supply, so I elevated the contacts on the MBP side by putting a dab of solder on them ... well the iron melted some of the plastic ... and I think you know were I'm going with that ...

I do believe that the ribbon cable where the latch broke is the keyboard cable ... and it occurred to me that if that cable isn't making contact, then pressing the power button will have no effect since the power button is part of the keyboard. Therefore, doing any kind of a reset (SMC etc.) will be a moot point since the power button won't be making contact at the motherboard level ... so I think the first order of business will be getting that latch replaced, or the entire connector as you mentioned. Do you know where I can get that connector?

I wouldn't recommend doing anything unless the Macbook turns on when the charger is plugged in. If the Macbook does not boot with everything else disconnected (but essentials like magsafe port and fan) and the charger plugged in, there is something else wrong with this.

You can get the keyboard connectors from sites like Alibaba or Aliexpress, but again, don't replace it until it will boot. If it is not booting, get a schematic and board view for your particular board, measure the main voltage rails until you find out what is missing.

The Macbook should boot when a charger is plugged in, even if the keyboard is not plugged in or recognised. Try plugging the charger in without the battery plugged in, see if it boots. To see if the keyboard is recognised, have you tried an SMC reset, to see if the orange light on the charger goes to green? Is the new charger supply directly from Apple? If not, it will likely not be genuine and I would recommend getting one from Apple. Why did you change the charging port? The new one could be faulty, so I would recommend plugging the old one in to see if it works.

Sorry for bombarding you with questions, but work through this and let me know how it goes.

Excellent idea, Reese ... and I assume you mean for me to check the voltages while the power supply is connected.

One: while the power supply is connected.

One: how do I actuate the power button when the keyboard ribbon cable is not connected properly to the motherboard.

Two: where can I get the schematics and this picture you're talking about that shows were to measure the voltages and possibly what I should be reading?

When you plug the charger in, the Macbook will turn on automatically (without pressing the power button) if the battery is unplugged. Like I said, if it is not turning on when the charger is plugged in, there is a more serious issue with the board.

Find your board number by checking the bottom left of the logic board, I think it is 820-3476, and Google it "820-3476 schematics/820-3476 board view". There is a page which shows the power rails, just copy and paste these into the board view program and it will show you where it is.

Reece, I finally got my MBP to power on. Turns out that the rather wide and curved ribbon cable that connects the main board to the right side daughter board was plugged in backwards. I assumed that wasn't possible, but apparently it is. I still have the problem of having no use of my keyboard because of that broken latch, and that daughter board that was plugged in backwards doesn't work at all.

After everything connected the battery and the laptop came up.