I had upgraded the RAM modules of my MacBook Pro to 2133 MHz Using Kingston's HyperX Impact RAM, I was using these in my system for more then 2 years, a few days back, I had some GPU issues so I removed my HyperX RAM modules and Reinstalled the original Apple RAM and gave it to Apple to repair.

Apple has now replaced the Logic Board, I then put back the HyperX RAM back in my system and it only shows me a solid power light when I turn on my Mac. It doesn't boot up or make any chime noise or anything, I don't know why this is happening,

The HyperX RAM were working fine for so long but after the logic board change out there giving me issues. I even tried my RAM modules in on someone else computer and the RAM works just fine. It's just not working in my computer!

What should I do?

Is this the RAM you used? Kingston HyperX Impact RAM

@mohur - When you start using RAM that is beyond the specs of what the system was designed to support you can get into some odd behaviors. Just because a company pushes a product as being better it may not be! Let me explain...

Think of it this way a given road has a speed limit of 35 MPH and lets say all of the cars that are on that road are at this exact speed. So having a car, bus, or truck makes no difference! As all of them run at this set speed. Now lets throw in a race car into the mix most can barely go 35 MPH as its just too slow! It spits and sputters as it tries to run at this slower speed. But on the open racetrack it can zoom!

RAM modules are very similar! The speed limit of the bus is set, you can't run faster than the bus (road). Yes, you can put in faster RAM. Doing it with the expectation you are going to get more or better performance is not really realistic.

What this system needs and your RAM: 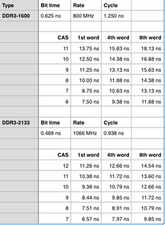 Now look at your modules timing:

So depending on the given system's hardware you may encounter a problem as the range of the faster RAM is not as wide as the slower RAM. Your original systems logic board PCH may have had just enough range to support the faster RAM module unlike your current board. It's also likely Apple altered the timing a bit as that might have been one of the alterations needed to resolve the GPU problem it was facing.

Hi Dan is it possible to alter the Timing again.

Sadly, I don't see that as a solution here. You would be giving up the graphics for the RAM. Best to sell the RAM and get the correct speed for the system.

I agree with Dan.

Hi Dan can i upgrade to DDR3L 1866MHz Hyperx , I'm currently using 1600 8Gb normal Kingston Ram, which i find really slow even for normal use open or shutting app and all , Compared to the 2133mhz

Sadly, I think what you are seeing is mostly in your head ;-}

Give the vid a watch & read the second article:

Both of these show there is no real improvement in using faster RAM in a desktop class system.

I would focus my efforts on the amount of RAM as that has a bigger bearing than the speed of the RAM. To put this into perspective a lean system (i.e.4 GB) will need to use the Drive for Virtual RAM which would be very slow Vs maximizing the RAM for the given use (i.e.16 GB).

In electronics, or at least Macs, processor and speeds vary in the same model. They are based on minimums. But there are variants. Some run faster than rated and some run at the posted speed.

The recommended RAM for your machine is DDR3L at 1600 MHZ. You are really trying to push that. Also slots vary. At this point I would try just one stick at a time and try it in both slots.

You may have to go back to the recommended sticks.

Hi , i used to Use 2133 Mhz Ram on my Laptop for 2 years , now recently i had a GPU issue , so apple changed the logic Board, After Changing the Logic Board the when I install the Sticks on the New Logic Board, Only the Power Light turns on on the mac , nothing else. i don't understand why, it used to work before.

No Its DDR3 HyperX Rams.

ya But the question is that it used to work Before On my mac I Used it For more then 2 Years without any issue. Recently i had a GPU Issue so apple changed my logic board , after the new logic board the Ram Sticks aren't working.

The fact it's only DDR3 is amazing. I have never seen clocks like that out of DDR3.