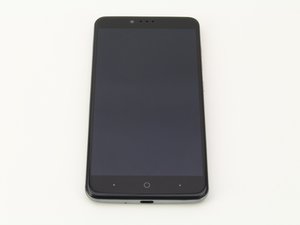 The ZTE ZMax Pro is identified by its black color, rear fingerprint sensor and its model name, Z981, which can be found under the rear case.

I have a ZTE Zmax Pro. This is the second phone of this exact model that I've had in the last 4 months, and they both have had the EXACT same flaw. I returned the last one because I thought it was just some manufacturing issue with that particular phone... apparently not.

The phone has randomly decided that it will not unlock or turn on. There is no red light, there is no FTM screen, and there is no android system recovery screen. I can't find anyone with this exact problem anywhere, but it's happened to me twice with two different phones! The screen is completely black aside from the slowly pulsating home button. I've tried charging it regularly, charging it through a computer as suggested, I've tried every single button combination there is, and it won't even so much as vibrate.

I didn't drop it. I keep it far from any moisture. The buttons aren't stuck. The battery was at an 87% charge when the screen went black, and it didn't seem to actually shut down (it looked as though it just locked like normally), so I doubt it's just got a broken charge port like some comments are suggesting.

Return this one as well.

It should also be covered by the manufacturer's warranty. Even the remainder of the warranty on the original phone purchase should still be valid, given that you have had both phones no longer than 4 months. Verify the purchase date on the sales receipt or proof of purchase document for the phone to be sure.

If the seller won't help, consult the warranty statement contained in the documentation that came with the phone as to what to do to make a claim for a warranty repair or replacement.

If you can't find it then search online for ZTE ZMax Pro warranty for your country.

I'm having the same problem, too. I can't afford a second, either. All we have to do is suffer together I guess

Is it still covered by the manufacturer's warranty period? If not how far past is it? If it is only over by a month I suggest that you still contact ZTE customer support and express your disappointment in the product failing so soon and politely ask if there is anything that they can do to help. It never hurts to ask. The worst that they can say is no and you will be no worse off.

Jayeff, it's questions like these that make warranties useless.

At least with a warranty, you have some recourse in the event of a manufacturing problem.

Can you imagine what it would be like if there were none?

Unfortunately it appears that some countries' consumer protection laws are not as good as others and naturally manufacturers are only going to do as much as they have to, to comply with the legal requirements of the country where their products are available. (not talking about ZTE, just warranties in general)

Oops, phrased that wrong. I ment to say that so many people are ignorant of warranties. What's the point of including one if no one knows about them?

So I tried multiple times and this very last time, I held the power button for about 20 - 30 seconds and my phone restarted and is now working properly. So try that if you're still having problems. If that doesn't work then I don't know how to help you. But yeah, hold it for 30 seconds or until it restarts.

I thought I held it down before for 30 seconds but after reading your comment I tried again and counted slowly. Mini heart attack avoided. My phones only less than 3 months old too. I wonder if the big update, a week ago had caused this issue

I'm happy to have helped you! So glad your phone is working again. Come to think of it, it could very much be the update. If it is, hopefully they do another update to fix it.

this happen to me as well. thank you.

That actually worked on my phone as well!! POS phone, it has been nothing but trouble. This is my second phone and the other one had the same problem. Thanks guys!!

Thank you, it worked for me as well.

My mom's phone was having this exact issue. I searched for a solution and found this website but no answers. I finally figured it out, for all those suffering-

PRESS AND HOLD BOTH VOLUME KEYS SIMULTANEOUSLY FOR 20 -30 SECONDS OR UNTIL THE HOME BUTTON STOPS FLASHING AND STAYS LIT. THEN RELEASE AND PRESS THE POWER BUTTON. Your phone should boot up like normal.

Yes! That worked! I was beginning to get nervous! Thank you so much!

thanks, spent two hours on phone with customer service and nothing, this did the trick, you're awesome!

Thanks, this did the trick!!

Worked for me. The pulsating home button never stayed lit, but the rate of the pulse slowed down. Pressing the power button on the back then launched the OS

This is my daughter's phone I just figured it out her phone went black and I stuck the top of phone reset button with an sharp object, held it 30sec and I pushed the 3rd but on side it will vibrate then come back on

Hey you guys the FREEZER TRICK WORKS, my phone is damaged, screen is cracked everywhere, the screen turns off and doesnt want to display an image every couple weeks I just pop that baby in the freezer for like 5 to 10 minutes, plug it back in to charge, and do the hard power button reset and it is resurrected again like Lazarus!

HaHaHa! Like Lazarus!, the way you excitingly explain....So funny! Mine cracked to !&&* too. gonna try

Just solved this same problem. The battery is completely dead. I had to use a power bank to provide power fast enough to turn the phone on into recovery. I then wiped the cache and data partitions and factory reset it. It would then start to boot and turn off after a few seconds as if the power button was being held. I was able to get pass this by continuously pressing/releasing the power button. It turns out that there was a short in the power button and would shut the phone off and try to turn it back on immediately, completely draining the battery even with the charger attached. Even with the power bank attached, the phone continued to power cycle, but the power bank provided enough power fast enough to allow the phone to keep cycling until the short resolved. It was probably due to some water getting into the power button after applying a soft screen protector.

what do you mean? Do I continuously press the power button whi;e its charging? My phone wont enter recovery mode even with a ppower bank.

This is my 2nd phone also and both phones have done this. The 1st one worked holding the volume down and power button at the same time. This phone I had to use the hold all 3 buttons until home button quit blinking then hit the power button. Not the only problem with this phone and wish I never bought it. Now that LG Stylo 3 has 32gig internal memory I will be going that phone. Metro won't replace it again and neither will ZTE.

Did you hold downthe power button or just press it once?

wait you just pressed the powwr button once? You didn't hold it down or anything?

None of these worked at all with my phone. But I kept digging into google and found someone who fixed it. This even works with water damaged devices!! Just put it in the freezer for about 5 minutes. If that doesn't work leave it in for more the ice can't damage your phone. Mine never showed an image before I put it in the freezer. I plugged it in and it said "battery empty, plug in charger for a few minutes, then power on". Just leave it in for 20 to 2 hours and the phone should be working at least for a short period of time. Please comment if this helped you too!

@jakob Kenley... your comment is the last on the thread from 2 years ago. I hope you're still in good health. I was losing hope right before i saw your comment.

Because nothing else seem to work. including the whole hard reset thing.. then BOOM here you are with the ice trick. Ofc I thought it was dumb at first, but since I was just gone get a new phone and throw this one out. Why not try it? . while my home screen button was still Glowing. I put mine in the freezing chamber for like 2-5 minutes then took it out. abit scared, When I took it out and pressed the power button, it turned right on!!! But sadly the power button isn't working as of now,well after that one last power on after. . Idk if that's due to me continually pressuring the button through the hard reset process. But thank you so much for Sharing this!

Hi this happened to me too all you have to do is hold the power button for ten seconds and it automatically restarts it.i found this out and it worked fine it happened two times and that solution worked, hoped this helped

if you have downloaded the "zedge" app, that might be the problem. shortly after downloading the app, the same issues were happening with my phone (black screen, no light, no turning on, or it went into "ftm" mode, etc.) so, i uninstalled the app and when i turned the phone back on everything was perfect again. its been months and this problem has not happened again. ( i still havent re installed that app either!) youre welcome

PRESS AND HOLD BOTH VOLUME KEYS SIMULTANEOUSLY FOR 20 -30 SECONDS OR UNTIL THE HOME BUTTON STOPS FLASHING AND STAYS LIT. THEN RELEASE AND PRESS THE POWER BUTTON. Your phone should boot up like normal.