I successfully changed an iPhone 5 battery for someone today and the phone booted up fine except that the backlight didn't come on. He told me it was like that before the battery died.

However I did notice 3 (I think) bare solder pads at the point circled in yellow in the pic, but not until later could I consult the iFixit guide to examine what it should look like.

I suspect these pads should be covered by a piece of foam rubber and might be something to do with the backlight. If they were shorting against the display back panel, would this account for the backlight not working, and is it likely that it would have damaged any other components? He was a young lad and I wouldn't want him to waste his pocket money unnecessarily on a replacement screen. 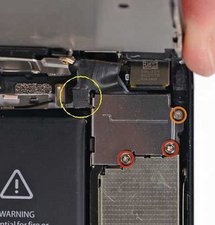 Yes, those 3 pads must be covered by tape. When exposed, they can cause backlight issues.

Ironically I never had issues when the tape was missing or not.