I am considering buying a used late 2015 iMac. The specs are:

I currently have a MacBook Pro Retina, with SSD blade, and it is fast! I'm afraid that the late 2015 iMac would be slower in terms of read/write speed, since it has a HDD (Hybrid: HDD and SSD).

My question is, is it possible to "Separate" the drives, so that in finder, I can have two volumes.

I "accidentally" split the Fusion Drive. And wasn´t even necessary using Terminals. Take a look: 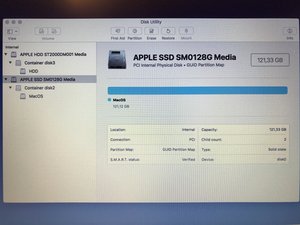 I just selected "Fusion Drive" from Disk Utility, then did a 128GB partition. After that, I got two separate disks - separating the HDD and SSD. Erased both drives to APFS.

So I named the SSD "MacOS". Installed the OS to that. Then moved my "Home" directory to HDD.

This configuration now makes sense to me. Got all my programs on the SSD, then movies, documents, pictures etc are "automatically" re-directed to my 2TB HDD.

Don´t think I need to upgrade the hardware.

The newer iMac's have two drive ports a 3.5" HDD and a custom blade SSD. Depending on the when the model was released it will have a two or four lane PCIe/NVMe custom Apple SSD.

A Fusion Drive'd system leverages both drive ports (each has a device) so there is no free ports.

So moving on what you can alter here... You can break the Fusion drive set to the discreet drives (which you need to do first) How to split up a Fusion Drive. The easier alteration is the swap out the HDD to a 3.5" SSHD or 2.5" SSD drive (with an adapter frame) in either case you'll need this part as well: OWC In-line Digital Thermal Sensor for Hard Drive Upgrade for 27" iMacs 2012 and Later and here is the IFIXIT guide: iMac Intel 27" Retina 5K Display Hard Drive Replacement. Replacing the blade SSD can be done but its a lot more work. Here's the IFIXIT guide to do that: iMac Intel 27" Retina 5K Display Blade SSD Replacement The rub here is getting the correct Apple SSD or go with OWC or Transcend SSD (both are only two Lane PCIe units).

Do be careful taking the display off as its very easy to damage it if you don't use the correct tools and follow the techniques shown in the guides. If you don't it would be a very expensive Oops!

I´m sorry, but I may be confused... Thanks for the long write up!

Am I correct to say that the iMac DOESN´T have SSHD, but rather a 2TB HDD working with the 128GB SSD Blade?

Am I in the right track here? If so - my question is - I would like to upgrade the blade to for example a 256GB or 512GB and having a separate HDD (Splitting the Fusion Drive)

Correct! You have TWO drives which are logically linked into One 'Fused' drive. It is not a SSHD which is similar! It is a single drive (SATA 2.5" or 3.5") which is a standard HD but has a SSD mounted for a deep cache. You can't see the SSD or alter it. You could put a SSHD into your system (Seagate makes a nice one) replacing your current HD drive.

You are also correct the current drive config (2 TB Fusion Drive) has a small blade SSD.

Before you alter anything you need to break the Fusion drive back to discreet drives otherwise you could have issues repurposing either drive.

As for replacing the blade SSD it's a lot more work to get to. Maybe its best to leave it and just use it for your boot drive and just put in the SSHD to get the speed you want here (hosting some of your apps and all of your data files).

@danj I'm thinking out loud here. The specs say: This model is equipped by default with a 2 TB "Fusion" Drive, which combines a 128 GB SSD and a 2 TB hard drive. It has a Serial ATA (6 Gb/s) connector for a 2.5" hard drive and a PCIe connector (PCIe 2.0 x4 NVMexpress interface) for the SSD.

Given the size of the existing SSD blade, I do not see how changing out to a SSHD in place of the 2TB standard drive would help. I would think adding a 2.5" SSD drive in a 960GB version and fusing it with the blade would work much better. [연계 제품이 누락 또는 비활성화 됨: IF107-135-1]

A dual drive setup with the OS, Apps & Cache on the blade makes sense, then use either an HD or SSHD for the deep storage. If you're doing massive video or music editing you need an external RAID'ed Thunderbolt drive set for the speed and depth.

@danj welcome to the graybeards, glad Addison finally got the problem solved. The only problem I have is the color. I have let mine grow since Thanksgiving and it is totally white.

@danj Thanks for getting Brock to fix this. He does a tremendous job for very little thanks, just like us ;-)

I was just wondering if you had any feedback on this. I actually have a 2017 iMac, into which I just put a 2TB 950 EVO, replacing the 2TB HD that was previous there. Right now I have the 2TB SSD fused with the 128GB NVME blade, but the read/write speeds are hovering around 500… which is not quite what I was hoping for (I actually think the regular 2TB fusion drive crushes this, in benchmark tests I’ve seen on YouTube).

I’m curious why an NVME+SSD fusion drive would be SLOWER than the HDD fusion setup. Any thoughts?

Reading your exchange above, I’m thinking perhaps better now to use the 128GB for booting, and the SSD for the home directory. But I remain curious as to why the NVME isn’t kicking in at least a bit, in my benchmark tests.

I have a similar setup and was planning on making the same upgrade. Did you ever find out why the performance was degraded? I would have thought it would have really improved the Fusion throughput having two SSD devices (albeit different transfer rates) vs. a SSD and HD.

Any ‘cheap' alternative’ advice would be grateful.

It’s starting to get quite slow now and I’m wondering what my best options are.

3) Separate the Fusion Drive and replace the HD with a new SSD say 500GB and just use that. Forgetting about the original ssd blade.

4) Get the ssd blade replaced.

5) Just use a external ssd as start up drive.

This is probably a late answer BUT, if I were you, I would:

Buy a 2.5inch adapter bracket for the SSD (you need to have something that physically fits the place that is occupied by the HDD and have it hold the SSD) - look up "snazzylabs" on youtube-he did an upgrade on an iMac 2017 - you may need the temperature probe kit for switch from HDD-SSD.

Install newest MacOS on the 1 or 2 TB SATA III SSD; skip the blade upgrade - it will cost too much and it is a lot harder to do.

These are easy to get to. You use a tool that looks and feels exactly like a guitar pick (and is readily available at any music store) to separate the screen from the case. You'll need the right double-stick foam tape to put it back together. iFixIt and OWC have tutorials. OWC has the right tape and a tool that looks like a plastic pizza wheel — faster than the guitar pick. Now that 2T SSDs are under $300 and a 2T blade can be had for around $700, it's an upgrade that makes sense. Getting rid of that mechanical HHD lets your iMac run a lot cooler, too — the energy savings will pay for itself over time. If you can find an Apple system pull, that's best for the blade. 1T are easy to find; 2T don't come up all that often and are expensive—an m2 with an adapter is 2x that of an SATA SSD but not nearly as fast as the Apple NVMe PCIe quad blade as found in the 2017 iMac and certain MacBook Pros. APFS does not run on fusion drives—even when it's a blade fused to an SSD.

It’s a little taxing, however, you can use corestorage to create an APFS acceptable RAID..

I have successfully upgraded my iMac (Retina 5K, 27-inch, 2017) with a 2TB Samsung 970 EVO NVME SSD. Please see post below for full details. The system is running well, with no problems. Best of luck.

I have been looking into the issue of upgrading my 27" late 2014 3GB fusion; it currently has 128GB PCI-E fused with a spinning HD

My proposed upgrade is a 2TB PCI-E fused with a SATA 1TB SSD. However, I understand the Apple Mac onboard systems do-not support fusion with SSD replacing the spinning HD

Therefore it looks like I will end up with internal two hard drives without fusion.

PRO-TIP: Don’t forget the additional SATA heat sensor for the new HD or your fan will be running at 100%