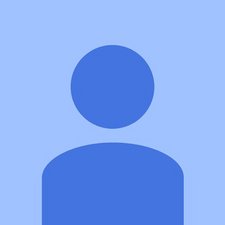 All of a sudden the keyboard and trackpad have started to work erratically.

Keyboard works really slowly, I have to type each character multiple times and sometime it just spurts the same key multiple times.

The backlight of the keyboard is also fine.

I have already tried doing a NVRAM and SMC reset but no change. However, an external USB mouse and keyboard works fine.

I have already upgraded the OS to HighSierra but it didn’t work.

It is a dual boot system so when I boot under Windows 10, it tells me:

I have already tried uninstalling the drivers under Windows 10 or upgrading bootcamp drivers but of no use.

There has been no water damage and the computer has been used with sufficient care.

I do not think it is a battery swelling issue either since the laptop is holding charge.

Do you think the following guide applies to me?

Is the assembly of Mid2014 version the same?

I just ran the diagnostic (CMD + D) and got the following error:

"There may be an issue with the display

However, there is nothing wrong with display.

There was no water spill as such. I did spray a cleaner to wipe my screen some but I do not remember that any moisture went under the keyboard.

The battery seems to be holding power and in good standing. Please see the CoconutBattery results attached.

There is no visual deformity on either side therefore I am not so sure if "battery swelling" could be the issue.

I have come across a few forum threads on the Internet where people have put their laptop in plastic bag and have cooled it in the fridge for a few hours just to exclude the battery swelling as the root cause.

Do you think it is a good idea? Would condensation not damage it? 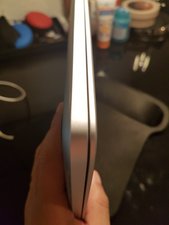 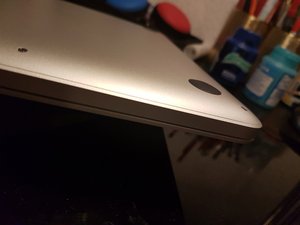 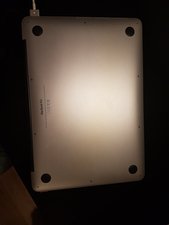 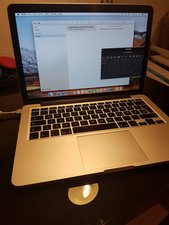 Could it be the problem with logic board? Then why does it work after multiple key presses? Or it is more like a driver / input buffer issue?

Here are two videos to give you an idea what I mean:

All the keys are working but sometimes need to be pressed multiple times.

I have also tried booting into Ubuntu via USB stick, hoping the standard USB drivers might solve the problem but it did not help. Had the same problem under Ubuntu as well.

Thanks again Dan for your help!!

Here is a screenshot from TG Pro 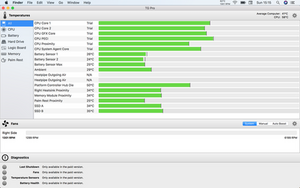 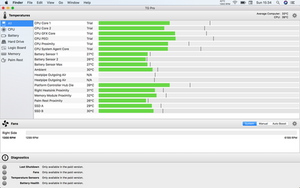 In both cases, no change in keyboard or track pad behavior.

In the meantime, the issue the keyboard has 90% resolved i.e., it does skip a character but not as bad as it were in the beginning.

However, the track pad has now gone completely dead. It used to move after a few swipes.

a top case replacement since they think it has got something to do with the top case.

Most likely it is the bus which connects laptop and track pad. They were not specific if it goes through USB controller or via their own standard.

They have also confirmed that battery is also fine, logic board is fine and there has been no water damage.

Do you think a top case replacement is necessary or we can also repair/replace this bus.?

I’ve had it professionally checked and the shop tells me that the “Trackpad controller on logic board” is defective. The solution is to change logic board, trackpad and the battery.

As such the battery is fine but it will be removed to do the repairs anyway so it is better to have it changed.

Do you think I need to change all these parts of the repair job could be simpler?

Did you have a liquid spill at one point? Or do you wipe down your system spraying a cleaner on it and then wiping it down? If either are true you likely have gotten liquid into the trackpad and keyboard causing corrosion.

The other possibility here is the battery has swollen up pressing on the uppercase. Then its time for a new battery.

Download this gem of an app: CoconutBattery post a screen shot of the main window so we can see the health of the battery. Adding images to an existing question

Well your battery is at its limit with 1000 cycles!

Determine battery cycle count for Mac notebooks There you see the expected life is 1000 cycles.

I should point out, in approximately 4 years you've cycled your battery around 20 times per month which is on the high side.

You may want to review how you use your system. Letting the battery to discharge below 10% this often is not good as this is when gases can build up within the battery and doing this often does cause the battery to breakdown. Try to keep the system plugged in as long as you can and try not to let it run down that far if you can.

Did you order a new battery yet? As I stated you need to focus on what is clearly at the end of its life. Your battery can have one or two bad cells which can mess-up the lower voltage tap which some parts use.

I would not put your system into a refrigerator. Chilling the system won't alter the battery when its just running out of gas. It would only help decompressing the gas built up in the battery if it was swelled up.

Lets try a different tack here. I'm wondering if one of the thermal sensors is messing you up. Download the great app: TG Pro. Take a screenshot of the main window (you may need to expand it a bit to get every thing to show up and paste it here for us to see.

Adding images to an existing question

Check it for viruses with a "paid for" good anti-virus program like Symantec Endpoint protection. See if you recently downloaded an Adobe Flash upgrade from a third party site.

I have done a fresh install using recovery mode.

Do you think it could still be virus?

Did you wipe the drive before doing the fresh system install?

Yes. Just did a clean fresh install from USB. Problem is still there.