Shadows at the bottom of the screen 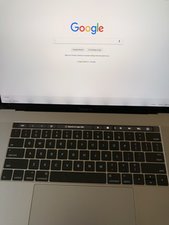 I've spilled 1 drop of cleaning liquid in the bottom of the screen, about 1 inch to the left of the "MacBook Pro" letters.

It started hissing. Had a white spot at the bottom of the screen, it started to expand, but in the morning it would start to contract and then after 12 hours it's almost gone.

UPDATE: The spot was gone after 12 hours.

The 9 shadows however probably won't fix themselves.

Went to Apple and to other 2 repairs, they told me I have to replace the screen. Will cost about $900 USD, either at apple or at other repairs.

I mentioned about the possible cable failure, everyone denied it, said the problem is in the screen, none of them even got to check the actual hardware, they just looked at it.

I think I'll just keep it like this and wait till some other hardware issue pops up.

I have everything Apple and now they've totally lost me as their customer.

Let me know if anyone found a solution, except for replacing the display.

UPDATE: The other day I turned on the MBP and heard some buzzing and crackling on the right side, the side where I usually charge it. Closed it immediately. Opened it after a minute, everything was fine. After a few hours I've noticed that the right speaker gets muffled if the volume goes above 50%. There was absolutely no liquid spill on the right side. Lots of people reported this problem. Wondering what's coming up next....

The cable issue you are referring to is symptomatically different! This is when the display winks out when you bend the lid and/or some of the LED's are not lighting up at all. Neither is the case here.

Besides you admitted the cause ;-} Using cleaning fluid which dripped down. I always spray the cloth and then use it to wipe the screen.

A bit weird for such an expensive product to be easily distructable by a random drop of liquid. They should’ve sealed it better. It’s not like a smashed it or dropped a mug of water on it, ya know.

Also I don’t think I “admitted” the cause, I think it’s more of a “stated” the cause, yeah @danj you should probably work on your communication skills since you’re very active on the forums and yet you manage to trigger a lot of people.

Apple has had their good days and bad with hardware design. For some reason the new Touch Bar & Function key models are more sensitive.

I does look like that, most likely they just wanna profit from their customers' mistakes, but in my case it's really not a $900 mistake and it seems like Apple is just punishing me right now + giving me a really bad experience from their device.

hey I just got the same issue and I didn't drop anything on my macbook :(

I don't know what to do since my macbook warranty expired, did your screen stays the same ?

Sadly, yes. I've enabled the permanent Dock at the bottom and all the windows are above the shadows. I got used it. Definitely not buying an Apple product again.

Zouhair - If you hadn't damaged your system like Dan M had then you should still try to get it fixed at an Apple Store (not an authorized repair center or dealer).

Just look through all of the newer TB & Fn key models postings here you'll find I would say over 25 people also reporting the same issue of either Stage lighting or screen wink-out when you bend the display back past the 30 degree mark. Both of these conditions has to to with the display assembly defect in cable connections to the T-CON logic board and main logic board.

I can tell you some people have succeeded in getting a replacement display by pressing Apple. Bring your paperwork and you'll need to work up the food chain until someone bends. Even still I would let Apple fix it as I'm sure Apple will relent on fixing this under an extended warranty program. It may require someone to start a class action suit to get them moving. Then you'll get a rebate for the costs.