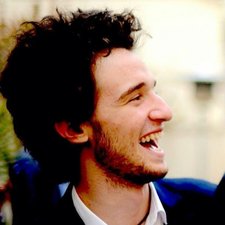 A couple of months ago I changed battery on my macbook pro 13 late 2011 and since i opened it i managed to change thermal paste on processor (which became hard like a stone).

Before closing it I run it opened and did a little stress test to see if everything worked fine, and it worked, but once I closed and restarted it I heard a POP and smelled something burned.

Then I heard the chime and noticed the screen remained white: no backlight issues, since I can still adjust the “amount of white” but nothing appears on screen.

The computer still works, during these months I used it as a desktop workstation attached to an external monitor, but now that I have a bit of a spare time I thought it is time to try to fix it.

It seems like there are a broken capacitor and a missing capacitor nearby the lvds connector, I gave a look at the blueprint but I’m not sure of what capacitors are they.

Can you help me recognize them? Do you think I need to replace the connector too? 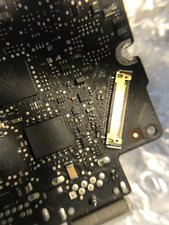 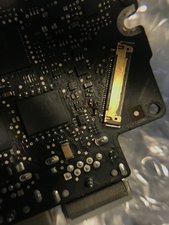 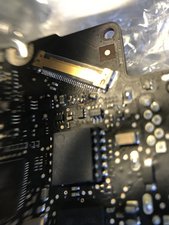 looks like quite a bit of damage. Once cleaned, post some more pictures to re-evaluate the damage. Right now this is what I show: 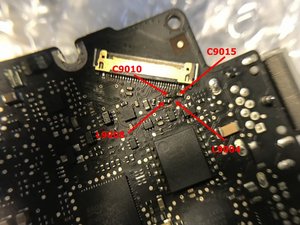 You didn’t loose a cap you lost a resistor/inductor!

But before we worry about that you’ll need to clean the area as I suspect you had a short which also damaged the logic board traces. Carefully wipe the area with 85% isopropyl alcohol and take a second pic.

You also need to figure out what is shorted

It is very hard to find a correct part online if you are not very tech savy in this, i cannot find the exact part on mouser website, there is just too many of them.

When looking for it on google, is there any specific code i have to put in in order to find the exact part please ?

Oh and, i am looking for L9008 as it looks shot on my motherboard from the left side, macbook turns on and chimes, fan spins, but zero picture.

I had exactly the same issue with my macbook, I believe this happened on mine because the display connector wasn’t fully inserted and possibly caused a short. After booting up I noticed a burning smell, checked the motherboard and saw the same resistors burned. I also booted up one more time (probably a stupid decision) after seating the display connector correctly. Booting up with the back cover off and I saw one resistor turn red and smoke coming from C9015.

It still boots up and works when connected to an external monitor so I’m hoping that if these are replaced the display should work.

I’d really like to know here I can purchase these parts, if anyone has ay further info that would be great.