"Not charging" with old and new battery and with different chargers

Why did I change battery: I used my MBP as a ‘power bank’, powering off a raspberry pi and let it run flat. It wouldn’t take a charge anymore.

When I tried to charge it the connection light would just stay green and refuse to charge. Pressing the battery indicator simply blinks (one light). This battery has already been replaced with a third party battery on 24th Jan 2017. Fine, I thought it has been a while since so I ordered another one.

Connected the new one. Bravo. 100% on the battery indicator. Left it on sleep mode connected to charger. Turned the mac on, realised the battery showed 76%. Weird. It’s not charging. I tried to clean the magsafe connector, reseat the battery, tried reset PRAM, SMC, restarted etc. And only once did the magsafe charger turned orange. I came back 5 mins later and it was green again, the charge was dropping yet again (50%).

I tried to charge with my MBA adapter, still green.

This MBP was never in contact with water and predominantly used in clamshell mode for years.

This MBP can run fine when I do the battery-bypass start up. (hold down power button, then connect magsafe and it goes max fan) 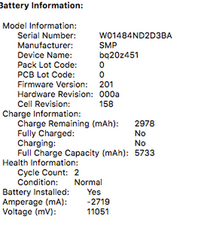 Install this app: CoconutBattery and paste a snapshot of the main window here for us to see Adding images to an existing question. Lets two one with the MagSafe connected and a second with it disconnected.

Also, who's battery did you put in?

I've pasted the screenshot with magsafe connected. (screenshot taken earlier) Sorry, I don't have a snapshot of the the battery with magsafe disconnected for now coz I've already removed the battery for fear of the battery draining to 0% and not being able to start it again like my other battery.

As far as I can remember, with magsafe disconnected it just says discharging with ___ watts.

The magsafe is green, i.e not charging even when totally powered down.

As for whose battery, it's from a chinese site. 'Device bq20z451' does appear frequently on amazon though.

Thanks for your reply!

What you are showing me is a healthy battery and the charging logic is working! So if this is your replacement battery I would go back in and re-install it at its fine! If this is not your current battery then it is not telling us anything on your current batteries condition. I suspect you have a bad battery and will need to return it to get a replacement by your description. But we have nothing to support that or can we rule out your charging logic within the system or MagSafe charger