DSi not booting after uninstalling unlaunch

Hi, I tried to install unlaunch on my DSi in order to use hiyacfw to play NES games on the go. After something weird happend, i tried to just start over from scratch. I started by removing the content on my SD card and then proceded to use the uninstall feature on the menu. Thing is, after a bootup, the console would not do ANYTHING, just a black screen with a code (only the first boot after uninstalling) and then a plain black screen every other time. I read online after doing the procedure that I should not have used this feature and that I now have to hardmod the console, but how do I do that ? Is there any other way than hardmodding it ?

BTW: I have a north america console.

(here is a picture of what the screen looked like the first time after uninstalling before being completely gone): 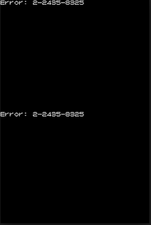 Sounds like you bricked it with an improper uninstall. Your only option is to restore the NAND if you made a proper backup. Depending on the guide you followed when installing unlaunch, you may have been given instructions that created an invalid backup, in which case you can’t really unbrick the console. And yes, you really do need to hardmod to restore a NAND backup.

I got the same thing but i uninstalled it using unlaunches uninstall menu (the sd cards nds rom folder got corrupted, so i backed everything else up to my pc formatted the card and put everything else back. After that unlaunch just said no cash with the sd card in. I thought uninstalling and reinstalling unlaunch would be fine since it says i can do that via the homebrew menu, but upon restarting to do so it booted to black screens. With no way to reinstall it.

What you should have might done was uninstall it using the unlauch installer menu. now that you did it the improper way, you may need to send it to Nintendo or another trusted repair shop so they could replace the motherboard or a chip that stores the firmware.

EH you bricked IT you need to Restore your NAND Of your DSi if you don’t want to Show ERROR :

Without Restoring Your NAND File You need to Uninstall HiyaCFW and remove it on NO BUTTON of Unlaunch and boot the HBMenu and open Unlaunch.nds and click Uninstall

how can he boot it off without the system software itself? tbh i have unlaunch 14 and i still leave my dsi like that to prevent it ending up like this.