New Battery is a dead battery after a month

I purchased a battery from Ifixit for my MacBook. IF161-107-3 MacBook Pro 15" Unibody (Early 2011-Mid 2012) Replacement Battery / New / Fix Kit. A couple weeks into using it the battery would drain within 30 minutes. Now even though it says the battery is 100% it dies as soon as you unplug it. The MacBook only starts up if I have it plugged in. Also I did the coconut battery test and it says the battery is running at 67%. Original battery is 6900 mah but current full capacity is 4591 mah. It been cycled 22 times for a full battery and has a cycle rating of 1000. I have no problem buying a another battery but someone said to me that because the unit is older the motherboard is draining the battery and it’s pointless buying a new one. Also, I have undated the memory to 16GB and hard drive on this computer. I’m open to any suggestions. Thank you. 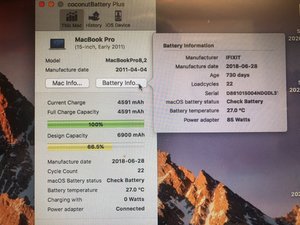 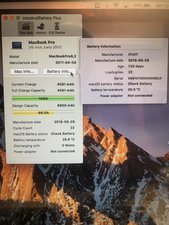 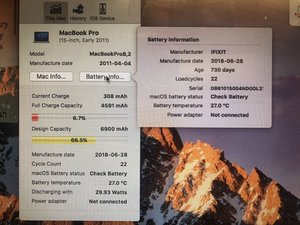 update: here are the requested photos. Plugged in, not plugged in, about 2 hours later on standby mode and then died quickly. This time I was shocked. It took a while for the battery to charge but once it hit 100% the computer worked for a few hours. First time in a long time. Though I know it should be longer.

I can only use my computer while it is plugged up. When it is unplugged it is dead.

I need a new battery for my MacBook Pro please