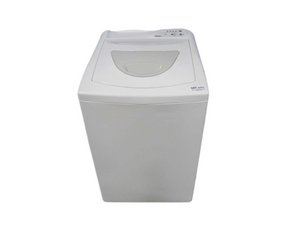 The Kenmore 110 Series is an easy to use home Washing machine created by Kenmore. 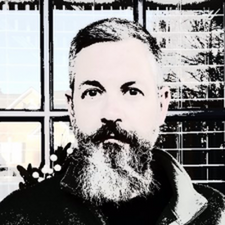 Leak At Kenmore 110 Series Intake Valves Even After Replacing Them

I’m flummoxed. For who knows how long, we had a slow leak in this Kenmore 110 Series washer and never noticed it until a small section of sheetrock fell on my wife’s car in the garage. When I investigated the source of the crumbled sheetrock, I traced it back to the laundry room upstairs and hence the washing machine. I isolated the slow but steady leak to the area where the hot and cold water intake valves are located, which is in the back of the washer directly behind the control panel. The partition they sit atop of was covered in water and water was pooling there and then overflowing down the back of the washing machine onto the floor slowly, but surely.

I purchased new hot and cold water intake valves and swapped them out with the old ones. This is a 10-year-old washing machine, by the way. I hooked everything back up properly and was confident this was the appropriate fix. Much to my chagrin, it was not the appropriate fix because water is still pooling on the partition where the valves reside and the only thing above this sealed partition, sealed to protect what’s below from potential water leaks ironically, is the water intake valves so the only thing, or things I should say, that can be leaking are the valves since they are the only thing residing above the partition. Yet they’re new valves and they are leaking just as the ten-year-old valves they replaced were leaking.

It seems this may be a pressure issue. I know the water pressure in our home is above normal but not egregiously so. I am replacing the PRV (it’s 18-years-old and no doubt shot) this week since I am getting a constant pressure sans any draw of 73 psi to 79 psi with an occasional spike to almost 90 psi. I know those pressures are on the higher end but I don’t believe they are high enough to make these valves fail, right? If so, these are poorly engineered valves. They should be manufactured to withstand water pressures twice the amount I’m experiencing. My dishwasher has a similar water intake valve and it hasn’t failed with these water pressures, so obviously it was engineered to withstand pressures much greater than I’m experiencing. That should be the expectation of all valves.

I could be wrong about my water pressure theory and it could be something else entirely. That’s why I’m here — to see if there may be something else going on that someone else may have experienced and could share that knowledge with me.

Thanks for you time in advance.

Clearly I’m not getting much of a response so I will plod along and document my travails for those who run across this problem in the future.

Here’s a photo of the hot and cold water intake valves sitting atop the sealed partition. Fyi, the Model # of this washer is 110-28002010. Water is pooling on this partition. It’s a slow leak, but a steady leak nonetheless. Water was leaking and pooling on this partition before I replaced both valves and it’s doing the same after I replaced both valves. Clearly, the valves, old or new, are not defective, albeit they may be poorly designed, so it’s something else that is causing the water to leak, and that’s where my pressure theory is relevant. 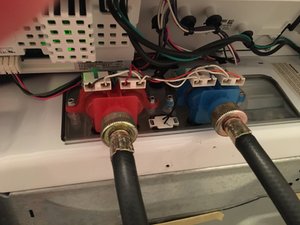 Here’s what the holes look like. This is an additional set of holes not used on my model so they are sealed, otherwise there would be an opening at the bottom as is the case for the holes that accommodate the hot and cold water intake valves. 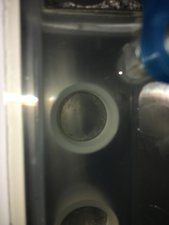 Here’s what the hot and cold water intake valves look like seated in the holes. Note the rubber grommets are secure and flush with the partition to guard against leaks. 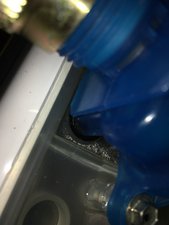 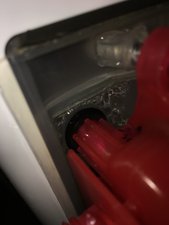 Here is what the grommets look like on one of the old water intake valves. 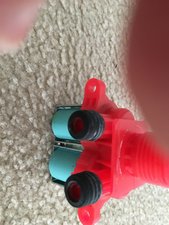 Here’s the rub. The pressure could be caused by the elevated pressure in my home due to a faulty failing pressure regulating valve (although the pressure never exceeds 90 psi and generally hovers between 73 psi and 78 psi) or it could be due to partially clogged and/or impeded tubing/piping leading from the water intake valves into the tub causing back pressure.

I will be replacing the PRV later this week when all the parts arrive but in the meantime, I am securing a long, thin, flexible tube/glass cleaner to use in cleaning the tubing/piping that leads from the water intake valves to the tub. This tubing/piping is only about a quarter of an inch in diameter so it wouldn’t take much to create a partial obstruction.

We’ll see how it goes. I’ll keep you posted.

Well, that was a bridge to nowhere. That thin flexible tube/glass cleaner didn’t go anywhere once I inserted it into the holes. I believe the pathway severely narrows, this is why. Narrows and bends. This could explain why increased water pressure in the house pipes might cause this leaking past the rubber grommets. Those narrow pathways that carry the water the final leg to the tub from the intake valves can only withstand so much pressure due to the severe constriction. Too much pressure and the water backs up and the result is water pushes past the rubber grommets and pools on the partition. This is my theory. We’ll see when I replace the PRV this weekend. If the replacement of the PRV doesn’t solve it, I guess a new washer is in order and this time it won’t be a Kenmore. I will not pay a repairman to fix this for $300, if he fixes it correctly which is hit or miss, when a new washer can be had for $500.

I replaced the PRV and water pressure is now properly regulated in the home yet this problem persists, so, it wasn’t the higher water pressure that caused the washing machine to leak. It looks like I will be buying a new washing machine. I refuse to pay for a $300 repair when I can purchase an Amana for $450. What a world. So few things are built to last these days. The irony is, this Kenmore touts itself as “Green” because it’s high efficiency. Well, all that efficiency is negated and some if you have to replace it after ten years due to planned obsolescence.

Just curious if you have narrowed it down to either water supply, hot or cold by turning off one supply tap (faucet) at a time and checking if there was still a leak.

Apologies if you have and I missed seeing it.

That's a great question. I have not tried that yet. I will and I will let you know.

I shut the cold water off and just ran hot. It leaks but not as bad as when both hot and cold are on. Upon close inspection, it did not leak from the area of the rubber grommets. I'm not sure where the water is leaking from, but it's not from there. Also, I checked under the lid after pausing the machine after it had filled and began its agitation cycle, and the water doesn't even cover the load. Not even close. I've seen comments that the HE machines are like this in Auto Sensing mode. I would think the load should be covered with water, right? Unfortunately, my machine only has Auto Sensing. You can't override it.

As well, when I lifted the lid, the bottom of the lid was soaking wet. That doesn't seem normal. Water should descend into the tub when filling, not splash against the lid especially considering the agitation hadn't yet begun, so it couldn't be because of the agitation cycle. If the lid was open, water would have sprayed all over the room and not an insignificant amount.

The pressure inside the home is usually in the range of 50PSI. Based upon your description, you are correct that the source of the leak is likely to be the rubber grommets and not the valve itself. You are exceeding the plumbing code which limits the pressure to 80.PSI This should be addressed asap. You can try the adjustment screw on the PRV itself to see if it can be released. I believe that once the PRV is replaced, your problem will also go away.

Thanks for your response, Dan. I have tried adjusting the screw on the PRV but to no avail. It does not change the pressure. The PRV is 18-years-old, so it stands to reason it is no longer functioning as intended. They're built to last 7 to 12 years. As I said, I will be replacing it later this week when all the parts arrive. Due to a tight space, I have to cut the old one out and use shark bites to install the new one. Whoever installed it originally when the house was built, didn't think about it having to be repaired and or replaced. The configuration they concocted is ridiculous.

I have run into similar situations with little room to work. Even though it may look odd, I would use elbows to and unions to install the new one. This will make replacement easier down the road.

What happens when you try the cold only, is it the same i.e. is the bottom of the lid as wet or not?

The water level in the machine is sensed by the water level rising in the water level pressure hose shown as part #20 - basket and tub parts diagram I can’t find it in the parts but on other machines the water level hose connects to a pressure switch. When the level rises to the selected amount set by the user the switch operates and this turns off the inlet valves via the control board. Check that the hose hasn’t come adrift or is loose from the switch

Searching online using the part number only got the tech sheet as it had been previously uploaded here on ifixit believe it or not.

If you haven’t got it already, (sometimes they’re found inside the body of the machine in a plastic sleeve) then perhaps this may help as well as it has the diagnostics for the machine allowing you to test individual functions etc.

Observing the apparatus, the only way for water to get onto the partition is back up through the rubber grommets where the intake valves extend into the holes, or the rubber seal around the electrical plug residing between the two intake valves. You can see it in the photos above. It's a white eletrical plug that extends through the partition. I believe it controls the opening and closing of the soap dispensers. Fyi, the soap dispenser on the right, there are three compartments, which I believe is for "Timed Oxi", has never worked. The product just sits in there and is never released. This indiactes there is a problem with the dispensing mechanism, and it could help explain the spraying on the top of the lid.

Considering all of that, I believe the source of the leak is where that electrical plug penetrates the sealed partition the intake valves sit atop. It's the only place I can seen, other than the rubber grommet seals around the extensions of the intake valves, where water could work its way up onto the partition from below.