I got a macbook A1465 off facebook with the intent to repair, the issue was that the screen went black and never turned on after that, i suspected a bad LCD and rolled the dice.

External monitor works fine, everything is functional, i reset whatever a macbook has to reset, i factory reset, i even tried windows, i upgraded to latest mac os, i removed the battery and left it overnight, no avail. It isnt a software issue.

I did some probing with a multimeter and the motherboard seems healthy, i replaced the screen connector with the hinge just in case, didnt help thought. Seeing that i went ahead and removed the screen bezel to check on the panel under it, and of course i ripped the left flex connector in half, i had to ruin something everything was going suspiciously well. Seeing the ripped connector i thought alright then now we are 100% sure the screen is not functioning. I leave it to that, some days later after reevaluating, i probed around to seek for lcd wake up signals upon booting, and i found them, that only strengthened my suspicion of a bad LCD.

But, as i had the mac upside down, i noticed at some point the LCD DID turn on, mind you to measure signals you need an LCD plugged in or else you wont get accurate measurements. Backlight was alive, screen was messed up as expected. After i turn it face up to take pictures, a smell of hot hot electronics fills my nose, not burned, but some degrees before burning per say. I pull the plug, i go to locate the source, it was the LCD board no burn marks visible though. was it my ripped connector that shorted something? I took care to avoid that, maybe a return signal wasnt there and the voltage shoot up? oh god i could have messed up a working LCD.

I sit there and manage to convince my self a new LCD panel is the solution, i would replace that and my mac would be working, so i order an aliexpress panel and waited, the panel arrives, very good condition like brand new. I plug it in for testing, i left the backlight connector unplugged for testing because i expected just image to show up, its hard to plug that flex cable in anyway. The same burned smell fills my nose once again. The screen has the same pattern of discoloration and everything, oh god iv ruined another new panel?? no idea, i talk with the aliexpress enginerd, we find no solution, his video was clearly showing my LCD panel working fine in his warehouse.

Now i sit here with nothing left in mind, the motherboard connections are clean on both motherboards, the hinge screen cable was just replaced, never used before on my mac, it makes no sence. The new panel is deteriorating, it used to show colors fine, now it has severe ghosting and it updates very slowly, for it to show the corect colors i have to invert them in the screen settings, what is going on. 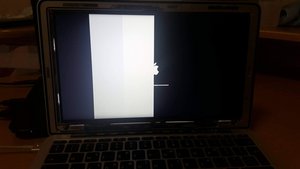 original after a bit: 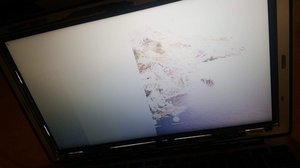 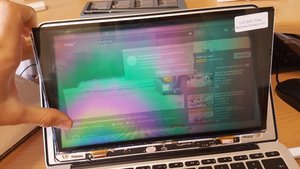 new after a bit: 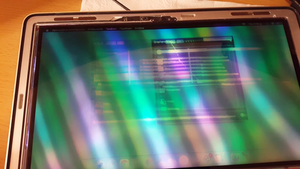