So after not powering up a Medion Akoya E6435 for several months, I found it no longer powers up at all when I tried to turn it on today. I did some basic fixes and failed to make any progress. As I removed the keyboard and felt around the parts of the motherboard that were visible, I could sense some heat coming from somewhere, it was very faint.

This prompted me to take a closer look as experience has told me a heating board is a bad sign. I disassembled the laptop completely and removed the motherboard. I then hooked up the charger and turned the motherboard on the opposite side where I felt the heat coming from. I touched the top of a chip and ouch, the heat was immense. It gets rapidly hot the moment the charger goes into the charging port.

Once I take it out, the heat subsides. I don't have to press the power button at all. It isn't even connected at this point. Pretty much nothing but the CPU and heatsink is attached to the motherboard.

So now I at least know the motherboard has some sort of fault. I cannot identify what the chip does and Google isn't helping. This is rather annoying as I'd like to try and fix it. The chip has markings “3F = 3L 80N” on it. Does anyone know what that is responsible for?

I tried to see if there were any replacement motherboards on sale, but unfortunately I couldn't find any for the E6435 model. Does anyone here happen to know if any other motherboards would be compatible with the laptop chassis? I know it's a long shot, but I thought I'd ask. 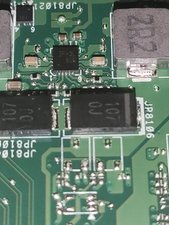 As for the motherboard number, I’m finding it difficult to locate. 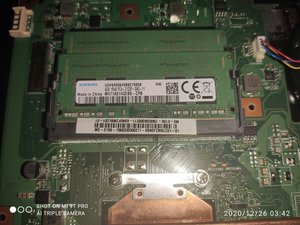 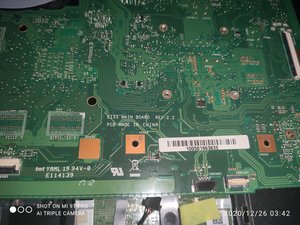 I’ve screenshotted the numbers I see. There’s a sticker on the CPU fan, but that’s likely the model of the fan, so I didn’t take the screenshot.

Post an image of the "chip" in question as that may help to identify it.

Here's how to do this on ifixit Adding images to an existing question.

@jayeff I've added some screenshots to the main post.

The motherboard is a E15S main board Rev2.2

The supplier in the link is what I found by searching for E15S mainboard Rev2.2 when I was looking for the schematics. If you’re considering this as an option then verify with the seller that it is suitable for your laptop as far as power requirements and sizing etc. It should be given the board number but it may have different specifications e.g. a different CPU perhaps. As I suggested it may be the same basic motherboard but may have different components to suit whatever the laptop manufacturer wanted and may not be as good as what you already have.

The chip appears to be a 6 pin chip but the chip’s motherboard component ID is obscured behind the chip in the image e.g. other chips in the image are JP8102, JP8106 etc.

Maybe searching for the chip’s motherboard ID may get some results e.g. E15S mainboard Rev2.2 (insert component ID JP????). You can only try this type of searching when there isn’t much info out there.

Unfortunately I didn’t find any schematics and the chip markings yielded no results either except this which may be the schematics but may just be the BIOS files and also you have to pay to get them and they may not be what is wanted.

Hopefully this is of some help.

It’s a shame. They seem to have a handful of E15S Rev 2.2 Motherboards on non-UK eBay sites, but none in the UK. They don’t seem to ship to the UK which explains why it doesn’t show up at all on eBay UK.

I’ve decided to use the Rev 2.2 motherboard I have as a junk board for soldering and desoldering practice as it seems there may be several faults with it.

I just don’t have enough knowledge yet to be able to troubleshoot this board any further. It’s not something I should be using as my first ever repair attempt. It’s too complex and I lack the understanding to really dive into the repair.

Just frustrating not being able to find a replacement that is reasonably priced. Even though I no longer use the laptop, it was a decent backup one. I’m going to have to keep looking on eBay and hope a suitable board shows up (may happen).

I found one potential board, but it’s about £150 and I’m not sure if I want to fork out that much. It’s also for the P6670 and has the i7 7200U CPU soldered to the board (what this broken board has). It seems to also have a dedicated chip soldered onto the motherboard in the spot that is empty on my broken board. My CPU cooler is not suitable for that as it’s only for the CPU. Layout is exactly the same, so it would fit the chassis.

This makes me wish I chose a more appropriate brand. It’s difficult to find parts, or much information in general, on these Medion-branded laptops. Ah well.