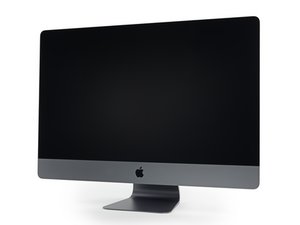 Is it possible to diagnose a bad power supply in an iMac Pro?

Hey guys. I have a late 2017 iMac Pro that recently just completely stopped working without warning. Worked fine one night, then the next morning it wouldn’t turn on. I tried different power outlets, I purchased a new power cord, and nothing changed. Then I took it apart. There are four points where the power supply makes contact with the logic board and I noticed one of those connections wasn’t touching. I remedied that, cleared out any dust, put everything back together, but still nothing. Can anyone tell me if/how I can test my PSU to see if it’s bad, or what else I might be able to do?

Well, there are a few things you should be able to check to see if the logic board is getting power. Using a DVM are you able measure the voltages across the two screws on each side of the power supply?

Is the logic board onboard diagnostic LED’s lit at all? 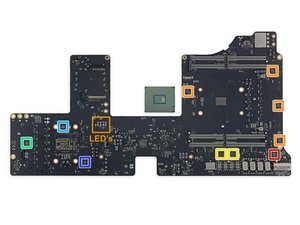 I measured 12v on both sets of screws when plugged in and there are no LEDs lit on the logic board.

Time to put the system back together and visit an Apple Store. Make sure you use the correct tapes and haven't left any signs you've been inside.

Crap :( Thank you for your help

What are the diagnostic LEDs showing with the machine plugged in. What do they do when you try to power up?

@mayer - There doesn't appear to be any lit onboard diagnostic LED's. Yet the power supply is reporting power at the two feed points.

FYI: I had the same exact thing happen to my iMac Pro on the 8th of May. It just stopped working. No power. No hum. Nadda. Ziltch.

Took it in to the Apple Store and they fixed it with a “hard software reset” which, it seems, included the EFI firmware and OS. Oddly, the cost was $0. Sounded odd to me.

I would recommend you disable auto update. Apple has been sloppy with the updates and upgrades and killing services you maybe dependent on.

Letting your system take care of things automatically does have its appeal. But, is it wise??

∙ The amount of work it takes to back-wind an update it a killer because it killed your Bread & Butter tools!

∙ When the update messes up the EFI or fails to finish bricking your system is likewise a killer!

∙ Then the worse is when it beaks a part so you now need to replace it as in the case of the 2014/15 I/O board as the HDMI chips firmware was altered in the update process and you can't undo it!

There was a point Apple had a good working update process its now gone! Over the last 10 years feature kill has been going on! What made OS-X a great OS is now gone in the macOS versions! I can understand some of the reasons this happened but I think its gone too far!

The Install/update process timeline is a joke! Its not even close! 3hrs is listed yet it only takes 45mins!

Then in years past you had one reboot. Now you can have up to four! And the screen is blank on most of them! OK, I know I shouldn't reboot or turn the system off but is it done or not? Which do a number on you not knowing.

Apple > You need to fix things!

∙ Apple Core Apps - Clear notification, listing of the apps being effected, have the ability to backwind