My iPhone 5S is no longer updating the battery percentage after replacing the battery. It seems to be charging and otherwise working fine.

Right after the repair, the battery showed 49%. I plugged it in, saw it was still 49% and walked away. After a little while, I checked again and saw the battery was showing 61%. That was the last time I saw the percentage change on its own.

It stayed at 61% until the next day. I performed a soft reset (by holding Power + Home), and it came up as 100%. But, it stayed at 100% while discharging for a couple days of use. After another soft reset, it showed 3%. I’m now charging it, again.

Update: It looks like battery connector on board is undamaged: 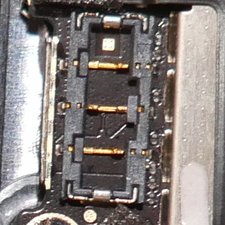 1) Random resets - with or without charger plugged in.

2) Battery level drops ~5% per hour without using phone and screen off.

What else should I investigate?

Wouldn't the fact that the battery level percentage initially changed at the beginning of the first charge with new battery suggest all components were still there?

I don’t know, but most likely there is a small component missing around the battery connector on logic board. This happens to me 4 times on a iPhone SE after replacing the battery.

I updated the original post with a picture of the battery connector on the board. It looks undamaged.

I measured the voltage at the 3 battery terminals:

Between the outer two terminals: 4.14V

1) Random resets - with or without charger plugged in. (This is probably the reason I saw the battery go from 49% to 61% at time of initial battery replacement - it may have reset without me realizing)

2) Battery level drops ~5% per hour without using phone and screen off.

What else should I investigate?

Any recommendations at this point?

Sorry, cant help you any further. I am just a beginner and know nothing about measuring the logic board with a multi meter. When this happened on my 5SE there was only 1 component missing and i make a bridge with soldering and that did the trick, I have seen it on you tube and learned how to solve this. Hope you work it out and find a solution.