I replaced my MBP battery with an iFixit battery about a year ago and it worked great until recently it started draining very very quickly. I tried calibrating it following iFixit’s calibration guide but it didn’t help. (Might be worth trying calibration again.) Are there other issues that can contribute to this?

I also noticed in recent months that the fan was running much more than before. I downloaded Intel Power Gadget and have observed that the CPU is often running much hotter than recommended, into the 80s and even 90s. Wondering whether a CPU issue might contribute to rapid battery drain and if there’s anything to do about it.

It may just be that this computer is nearing it’s end of life! It is obviously rather old. Last year when I replaced the battery I also upgraded to 16GB RAM, 500GB SSD and a new HD cable — all other parts are original — and for most of the year it ran better & faster than ever! But 10 years might be near the end of the road for this one.

Are a lot of you out there in iFixit land still keeping these ~10yo MBPs going? 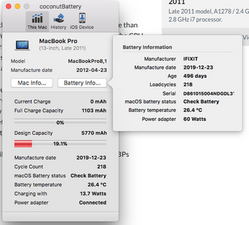 Let’s get a better view of things, install this gem of an app! CoconutBattery take a snapshot of the apps main window and post it here for us to see Adding images to an existing question

My Late 2011 GPU died so I upgraded it to a 2012 logic board and after three batteries its still running great! I'm banging on it now ;-}

@danj thanks Dan! I just uploaded a coconut battery screenshot.

my GPU is definitely struggling, it's especially noticeable if i'm editing video 1080p or higher. would a logic board from any 13" 2012 MBP be compatible with mine?

p.s. this might not be relevant but i forgot to mention that i'm still running 10.12

Sorry to say the 13” models (IG) are not well suited for video work. A short one sure but anything longer with lots of edits needs more power. You really need a 15” model which has dedicated GPU (DG) at least 16GB and a sizable drive which is not over loaded. A 1TB which still has around 1/3 empty will do for a 30 ~45 min vid.

For sure. I'm planning to get a Mac Mini to be my primary video & audio production workstation