Broke small chip (?) next to battery connector, what are my options? 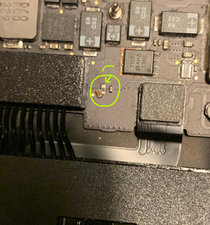 I knocked this small part while trying to lift the battery connector.

What are my options in this case?

This is a great first soldering project! You have plenty of clearance and it’s a common capacitor you can order from mouser.com or find on a donor board.

That particular component, if left off will probably still allow the computer to run. It’s a capacitor which is ultimately a part of the charging circuit for the battery, but since it has one side on ground is likely intended to keep electrical “noise” off this line. So not integral to functionality.

However, is probably still not a bad idea to replace it since it is one of only 2 such capacitors on this leg of the line. If you don’t have much experience soldering it is probably best left to someone who has those skills. It looks like it would be a fairly easy fix for someone who could solder on components that small.

Thanks for the information :)

@kazonko just to add to what has already been said. You do want to eventually replace it. As much as I despise Apple for what they are doing in general, I would never assume that they are adding components to the logic board that are not needed :-). You may run into some charging issues since this capacitor is part of PPVBAT_G3H_CONN. Anyhow, the component that broke off is C7060 which is a 1µF 25V 10% capacitor in a 0603 package. It’s big enough that it can be soldered with a loupe etc. Anybody that has done some decent soldering should manage to assist you with this.

@oldturkey03 Thanks for the detailed explanation! Will come in handy as I managed to lose the capacitor while replacing the battery... I'm currently using the mac and it works without a problem, but this might be the opportunity to dive into soldering etc :)

You’ll need to find someone locally with the tools and skills to micro-solder the replacement capacitor. Otherwise you’ll need to do it your self which could be risky if you’ve never soldered before.

Noob question, can the mac still work without it?