My MacBook Pro early 2011 after a time running make slow?

I have Mac book pro early 2011 because of apple problem with windows I had to disassemble to fix the AMD graphics chip. My Mac does not have battery, also it has 8G RAM and SSD Samsung 850 pro 512GB.

I want to know why after running about 1 or 2 hours or copying huge data to external HDD it becomes very slow and after restarting the problem is solved. Also in this condition when I monitor activities the CPU Load is very high. The other thing is the MS office program is very slow always.

I want to know if this problem is because of the Battery or AMD graphics chip?

Some where I read that trackpad problem reference to battery that is disassembled!!

Your issue is the lack of battery! Your system was not designed to run without it. Within the battery there are sensors that the system's SMC services needs access to. As you severed access your system is running in CPU Safe Mode which SMC pushes the Fans and lowers the CPU's clocking to make sure the CPU is not damaged. Without the battery the system will also lower its processing even lower when the process load is to great for running on the charger alone which you are also seeing.

As an example here's a damaged chip which would be the end of your system! 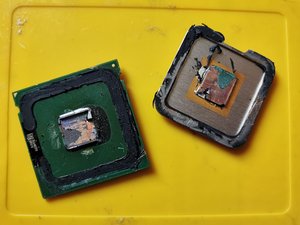 You talk about fixing your graphics chip what did you do?

@msh666 - Sadly, the GPU chip's failure is not the bad solder to the logic board its the Tin solder used to connect the silicon chip to the base within the flip chip design used in this AMD GPU series. 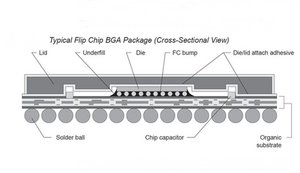 Here we encounter Tin Whiskers Pure Tin solder can encounter this as well as some alloys of Tin solder as well. Your resoldering (reballing) allowed the whiskers to recede enough to allow the chip to work.

So I assume you disabled the AMD GPU which is about all you can do. But! Keep in mind the Intel HD Graphics 3000 is not very powerful so don't expect high performance graphics.