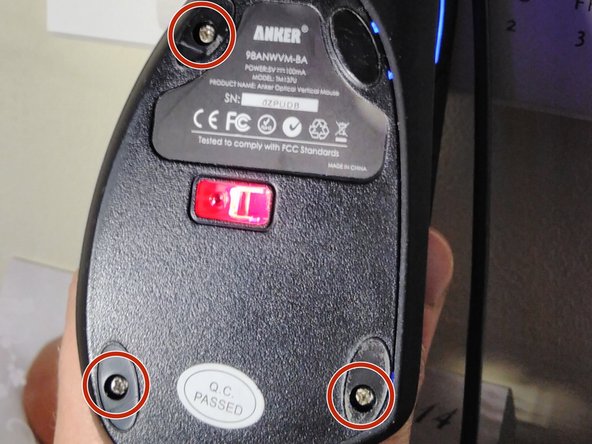 I fixed the loosen optical unit by (double-sided) adhesive. The most "difficult" part is just the proper fixing of the optical unit to the bottom cover because holding up-side-down is neccessary...

i have a slightly newer model of this mouse. the cursor was making a repeated square motion. Seems like the photodiode picked up the blinking blue LED, which I think is only an indicator for the user. The actual functional LED seems to be infrared rather than red in the new model, and placed closer to the blue LED. I fixed my problem by covering the LED more completely with opaque tape. Not sure if my explanation makes sense? This is what I deduced, with the help of the above post and some trial and error, seeing that the cursor movement correlated with the blue light blinking and that the behavior was prevented by blocking the blue light with my fingertip. Also broke the battery leads in the process and had to resolder the through-hole connections.

How do I disassemble the top part which has the buttons and scroll wheel.

To disassemble the button-unit you have to follow complete step 1 and disconnect the grey cable.

If you look into the top button carrying unit you see a clip (or two?) at the side opposite to the scroll wheel which you can carefully click out with a finger or a screw driver. Then only the buttons itself should lift up alittle bit and you can push it a little bit out. At the tip of the button unit there are just two hooks wich you can carefully pull out of the holes. Then you should have removed the buttons and can see the red button-devices underneath.

With this procedure I regularly adjust the pressure point of the left mouse button as it sometimes looses connection to the button-device. So I glue some stuff (for now very thin metal of <1x1mm² worked quite well) on the black cross-shaped “spike”.

Hi, I would like to write the guide for the upper part disassembly (I changed the scrollwheel).

Do you mind me reusing the first 2 photos of your first step ? I didn’t take photos of this part.

Or even better, make the first step a separate guide so I can use it as a prerequisite ?

@Robert Thanks for the instructions on how to disassemble the button-unit. My scroll wheel was dirty and your comment made it possible for me to get in there and clean it. Didn’t even consider that both the left and right click buttons would clip off first before separating the unit. I think a visual guide for disassembling the button unit would be very useful as well. Thanks again!