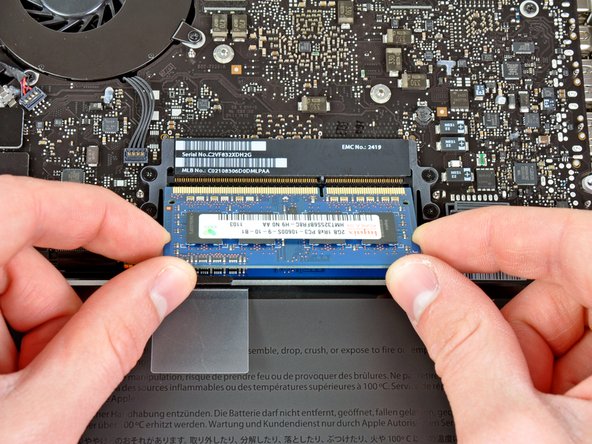 Upgrade your RAM for a noticeable increase in speed.

What kind of ram should I buy? DDR2 or DDR3?

It takes only DDR-3 RAM.

I'm asking because I read in http://www.crucial.com/store/mpartspecs.... that it can actually take 16gb. Thanks!

Yup! I upgraded to a 16 GB DDR3 Corsair mac memory kit from Newegg and it works like a charm. I got this kit: https://www.newegg.com/Product/Product.a...

Is there any difference or problem with the clock speed 1333 mhz or 1600 mhz?

Question - my MBP currently has 4GB RAM. Is there a 2nd RAM slot that will allow me to increase my RAM by adding 4GB or 8GB. Or do I need to replace the current 4GB with a new 8GB module?

Your MBP will have two chip slots that are stacked on top of each other. When you remove the top chip, you'll see the second chip sitting below it. It is best practice to replace both chips with the same amount of memory. So your current computer should have 2 - 2gb chips, so if you want 8gb total, you would install 2 - 4gb chips. Or for 16gb total, 2 - 8 gb chips.

Thanks for the straightforward and excellent guide!

I followed instructions & pushed power button. My screen is dark & computer is beeping at me. Suggestions on what I did wrong?

if its a black screen and 3 beeps it sounds like your RAM did not get seated all the way. I would take them out and reinstall them.

Can i installed 1600mhz Ram in my macbook pro 13’ early 2011 model. Can u suggest any specific model in Amazon so that i can order the same.

Between the hard drive and memory upgrade, my early 2011 Macbook Pro runs like it did when brand new (maybe even faster).

the official support page states a maximum of 8 GB of RAM for this notebook, this page instead sets the maximum to 16, who is right? :-D

Officially, the memory speed of a early 2011 MBP is 1333MHz (cas latency 9) because the that’s the CPU:s highest supported memory speed. Memory voltage is 1.5V.

It will however work perfectly fine with 16GB (2x8GB).

The thing is, most 1600MHz modules run at CL11, which will mostly negate any gains from the higher frequency. So, what do you do?