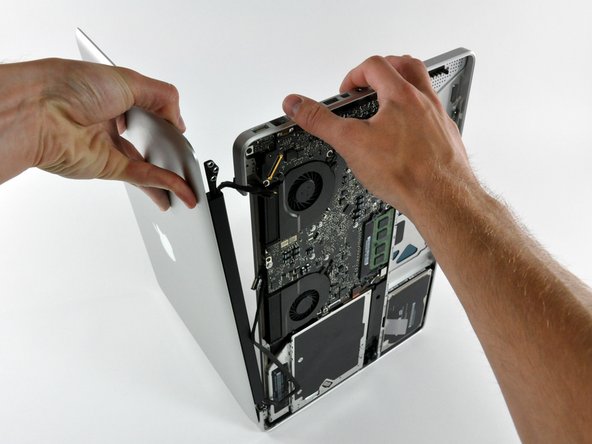 Just repaired my Macbook Pro using this guide! Kudos for writing such easy to follow guides complete with pictures!

I used this guide to replace my hinges, but I noticed that the real problem was that the display was separating from the case. I Googled it and found a few reports like (https://discussions.apple.com/thread/371...) indicating that Apple has a replacement program in place addressing this as a latent defect.

I took my machine to the local Apple store, and even though I bought it at the end of 2008, they replaced the display for free.

If you're having a display separation issue it's worth seeing what Apple says before digging into it.

This thread is now "not authorized" for viewing. I think Apple doesn't want anyone to know about this issue!

This is a great guide. I also read the guide pertaining to the 2.53 GHz Mid-2009 MacBook Pro Display Assembly.

Bottom line, keep the screws to the same MacBook. That's easy enough, just remove the captive screws from the cables to keep them with the same MacBook Pro they were from.

(Also, the camera cable where it attaches the logic board was slightly closer to the optical drive and seemed to overlap it slightly when transferring the Mid-2009 display to the Late-2008 MacBook Pro. This didn't seem to pose a problem.)

I have to add to my previous comment about switching a mid-2009 15 inch MacBook Pro display to a late 2008 MacBook Pro. The reed switch that causes the computer to sleep when closing the display is on the other side. I tested this by holding a broken display (which has lots of magnets across the top) near the right side and this 2.53 GHz late-2008 Unibody MacBook Pro went to sleep. The magnet for the reed switch on the mid-2009 display is about halfway up the left side of the display. So I didn't notice this until I tried to close the MacBook and the backlight stayed on.

So while the display works perfectly and the hinges, camera cable, and LVDS cable match, the reed switch magnet is on the left side now (that meets the ExpressCard/34 slot, instead of the SD Card slot) instead of on the right (near the security slot) where the actual reed switch is for the late-2008 MacBook Pros.

I can just choose sleep from the Apple Menu every time, or put a tiny "refrigerator" magnet on the right side of the display.