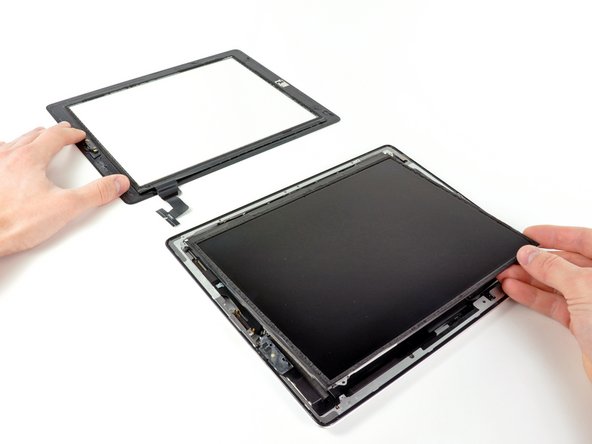 There is one very important step not documented here. There is a wireless antenna attached to the screen just to the right of the home button. This also can be easily ripped if you aren't looking for it.

Additionally, take great care near the volume control button area since there is wiring under there for power. Consider viewing other youtube videos of the process to get different perspectives.

Last, be very patient---take deep breaths as you slowly pull the screen up.

One other step that would be nice to see is how to properly bend the flex cable of the new digitizer ( which out of the box is straight and stiff). The hardest part of the repair for me was negotiating the flex cable of the new glass so that the new glass would fit flush on the lower left corner. It has to bend in a certain way.This drove me nuts.

Really difficult repair but the guide is great. Success!

I successfully performed this repair a couple of days ago. I would agree that it is very difficult. I spent a full hour just going over the instructions and putting tape marks on the ipad - it was very helpful to have a clear mental picture of where all the danger spots are.

In my case, the screen was severely cracked, so the repair did not proceed as pictured. It was basically impossible to get anything but small shards of glass to come up at any given time, so after some releasing, I ended up simply lifting the center part of the screen up off the ipad, leaving cracked glass around the bezel. Knowing where all the internal parts were was essential in this case, since I could have easily damaged some parts otherwise. I could see that the way the screen was lifting away, the antenna, for example, would not be affected. Some luck may have been involved, but the repair did work.