2018 has been a wild ride here at iFixit. The year hurled into action with Apple’s batterygate fiasco. We launched some new aquatic-inspired toolkits. Microsoft put our friend Eric Lundgren in prison for reproducing restore disks. And, after 15 years, we finally partnered with our first major cell phone manufacturer!

Thanks for joining us on this crazy journey to teach everyone how to fix everything. And to celebrate our lovely community of fixers, hackers, makers, and tinkerers, we’ve put together a recap of the most popular and memorable moments from the year—plus some exclusive behind the scenes info about how they came to be. Take a little walk down memory lane.

It should come as no surprise that our most popular teardown of 2018 was the iPhone XS. And this year, we did our annual iPhone deconstruction a little differently by tearing down both the iPhone XS and XS Max side by side, in one guide instead of two. The iPhone XS was the (slightly) more exciting teardown of the two devices, boasting a newly designed single-cell, L-shaped battery. How did Apple even do that?! Well, you’re in luck because one of our tech writers, Taylor Dixon, talked to WIRED all about it.

Our most popular repair guide this year was *dun dun dun* not actually published in 2018! (None of our most viewed guides were.) But, this is actually to be expected, since it usually takes folks a year or so of owning a device before they actually need to fix anything in it. 2017 also ended with Apple’s whirlwind battery throttling scandal that affected all iPhones 6 and newer. We consequently slashed the prices on our iPhone battery kits to match Apple’s scandal-mitigating discounts—and kept them marked down all year long.

Anyone can go to our Answers forum to inquire other fixers for hardware advice. The forum is moderated entirely by our online community, and it’s got a plethora of recommendations ranging from weirdly effective to wonderfully commonplace. The most popular topic of 2018 was this question about a stagnant startup screen posed by community member Madeline. User sydneybush responded with a complete series of troubleshooting steps for getting your Mac to boot up successfully. So if you have a white startup screen you can’t quite seem to shed, check out the thread.

When our CEO Kyle Wiens first pitched this idea and told us he was already writing the blog—we thought he was crazy. But, it turns out nearly 200,000 of you also found MRI machines knocking out iPhones with helium fascinating. Damn, Apple, another thing you can’t do right! Just kidding—contrary to popular belief, we don’t hate Apple. We just love repair. And we were glad to provide some light fodder for all you technophiles out there.

Apple’s HomePod is shaped like a toilet paper roll, but it’s built like a tank. We even needed a hacksaw to crack open its mesh-covered plastic fortress. Needless to say, it scored a 1/10 on our repairability scale. Check out the popularly destructive video above.

Geez, you guys really like destruction, don’t you? I guess you could call us masochists as well, what with our hacksaws, teardowns, and fascination with battery fires. But, in any case, this is some of the most impressive water damage we’ve ever seen. Psst, here’s how to stop water damage in its tracks before it gets to this point.

This was a huge deal for Right to Repair. The FTC finally cracked down on device manufacturers using Warranty Void stickers that became illegal 40 years ago! We launched an ensuing (two-part) sticker hunt, which warranted dozens of entries to send to the FTC. See which manufacturers are guilty of sticker-shaming at the #VoidIfRemoved hashtag.

I guess you could consider this video a part of our top teardown of the year—but we think our ultimate iPhone beer test deserves its own special shout-out. To prepare for the livestream, our teardown team spent the week leading up to our iPhone XS Teardown designing, building, and filling this 2 meter tube with beer. The result was pretty legendary. See for yourself.

Whew! As you can see, it’s been quite the year in iFixit-land. And it wouldn’t have been possible without you, our awesome community. Thank you for everything you do to make the world a more repairable place. Here’s wishing you a very merry Fixmas, and a happy new year!

See our most and least repairable devices of 2018 and 2018’s biggest wins in Right to Repair. 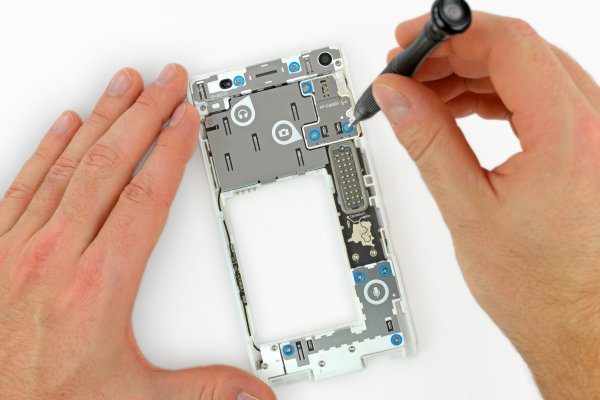