In 2018, a number of MacBook Pro users—with models from 2016 onwards—discovered a serious design flaw that causes the screen to fail after repeated opening and closing of the laptop over the course of a few years. The ensuing scandal was, of course, dubbed Flexgate, after the flex display cables causing the problem. Despite Apple’s refusal to acknowledge the issue, though, their latest MacBook Pros have a longer cable that may be attempting to make up for previous shortcomings.

You can read more about Flexgate in our rundown here, but in short: Apple, in an effort to make their laptops even thinner and sleeker, is using thin, fragile flex cables to connect the display to the display controller board beneath the touch bar. In this space-saving design, the thin cable wraps around a small circuit board where it is pulled taut as the laptop opens and closes. After a year or two of opening and closing the laptop, the cable will wear down, causing the display to start failing with a distinctive stage-light effect.

And since the cable is integrated into the screen, it cannot be simply swapped out—the entire screen must be replaced (a $700 part). Apple has yet to acknowledge the issue or extend their warranty to affected users.

So far, so good—another design defect exacerbated by Apple’s insistence on making products thinner at all costs. However, when MacRumors user Olivia88 noticed their 2018 13” MacBook Pro seemed to have a longer cable than previous models, we were intrigued. Since we were just wrapping up writing the repair manual for the 2018 model anyway, we checked inside our 2018 15” MacBook Pro again to measure its cable against its 2016 predecessor—and found the 2018 cable was, in fact, a full 2mm longer. Since this change appears in both our 15” model and Olivia88’s 13” model, it’s plausible this change is present in multiple, if not all, 2018 MacBook Pros. 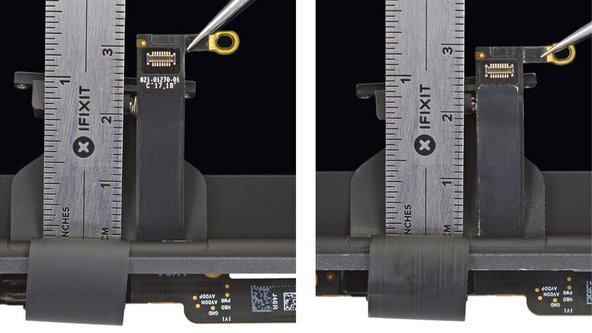 “This is significant because it gives the backlight cable more room to wrap around the board and not come into contact with the board as the laptop is opened past 90 degrees,” said Taylor Dixon, teardown engineer at iFixit. Presumably, this contact is what led to the wear, tear, and eventual failure of the cable—though the exact cause of the failure is tough to pin down. “Since we have yet to experience the problem for ourselves, it’s hard to say for sure how much of the problem is the cable being in close proximity to the board and how much of it is the length of the cable,” said Dixon. “The longer cable definitely gives more room to breathe around the board, but it’s still in such close contact with the board that it’s impossible to tell whether it’s rubbing on the board at any point.” In other words: this could solve the problem, or it could just delay the cable’s inevitable failure a bit longer.

Here’s what the 2016 backlight cable looks like with the hinge fully open: 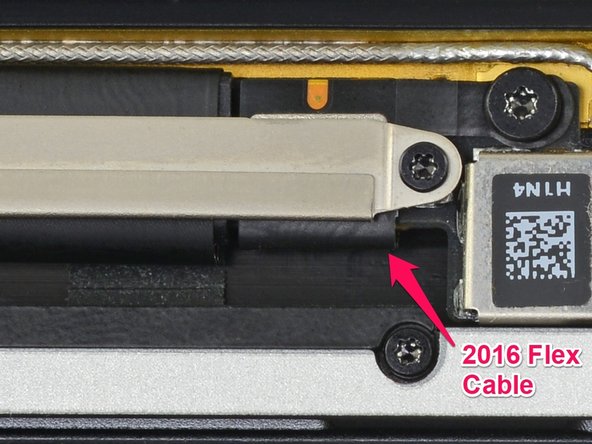 And here’s the same cable with the hinge fully open on a 2018 model: 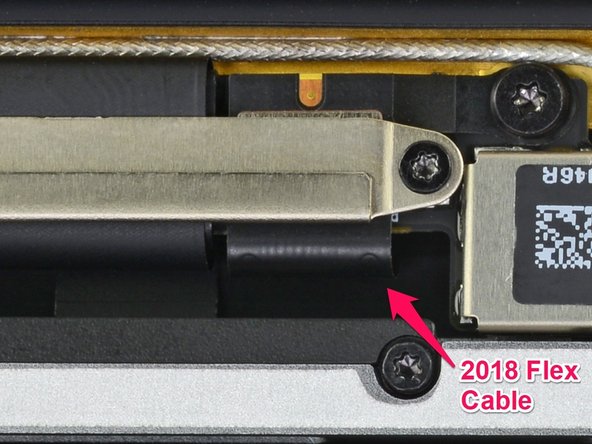 You can see there is dramatically more room with the longer cable. We’ll have to wait another year or two to see how this actually affects the prevalence of Flexgate issues on 2018 MacBook Pros. While we didn’t predict precisely this failure mode, expensive repairs like this are exactly why this device earned a rather pathetic repairability score of 1 out of 10.

Worst of all, this implies that Apple knew about the Flexgate issues before public backlash hit its fever pitch, and still refuses to even acknowledge the issue, let alone take responsibility and offer free repairs. In fact, multiple people claim Apple has deleted support threads regarding the issue on Apple.com, attempting to sweep this under the rug rather than offer an extended warranty program to those affected. You can sign this petition to try and get their attention, or fill out their feedback form here.

Unfortunately, this feels like par for the course. Apple has a long track record of fighting efforts to encourage more repairable design in green environmental standards like EPEAT, and this is just another design flaw on the pile that forces costly, unnecessary replacements on consumers who bought a multi-thousand dollar laptop with the expectation that it won’t break after only a couple years of normal use. Do you hear us, Apple? Do better.

We all love Apple Gear for its innovated way in working with you not against you within its OS and product design!

We hate Apple for it lack of serviceably and ease of recyclability! Over the years we have lost both!

Rivets - Instead of screws.

Not standardizing on one screw head design - Both externally and internally! - It adds costs and complexity needlessly.

While Apple had gone to great lengths in its own energy efficiency and its raw material recycling. Apple has failed the customer!

Hi, my mac 2018 got flexgate problem 2 days ago! If i unfold laptop fully, the screen show purple color only! If unfold 40 degree, the screen works well! Apple should repair it free! Too expensive to replace whole screen

My Late 2016 non-touchbar MBP 13” was affected by the Flexgate issue and I was covered through their customer quality program after some trouble negotiating with my local Apple Store tech. The MacBook was in Like New condition, yet they not only replaced the screen and faulty flex cable, but also the entire bottom metal panel assembly, battery, keyboard and trackpad. I was quietly updated to the new keyboard switches as it turns out as well. Not complaining, but the hush-hush repairs/upgrades weren’t exactly transparent or necessary to address the original problem…

FLUXGATE issue with my 2017 model ..so frustrating that they won’t acknowledge their design flaw and want you to cough up $500 and up to fix the issue .. 2016 models are being fixed free for the same issue and the later models with exactly the same issue are left out to sulk .. shame on apple

was just told at my local Apple store that my 2018 mac book pro 15” needs a new screen.

Lines across the bottom and up the side of the screen