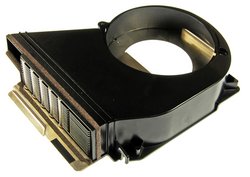 The PlayStation 3 Slim model CECH-20xx is the first model of the PS3 to feature the smaller form factor. It was released September 1, 2009 for $299. The power and eject buttons are actual depressable buttons, unlike the capacitive touch sensitive buttons of the older models. The CECH-20xx ships with either a 120GB or 250GB hard drive. The CECH-20xx uses a 65nm version of the RSK Reality Synthesizer GPU and consumes roughly 107W while gaming.