Replacement parts for your 17" Unibody Early 2009 model to fix your broken laptop! 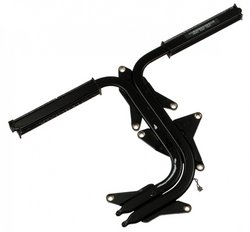 This part attaches to the processor and helps dissipate heat.

The MacBook Pro 17" Unibody, announced in January of 2009 has an aluminum case like the laptops before it, however the case is machined out of a single block of aluminum. The Unibody revision also introduced some new features for Apple laptops: dual video cards (one for regular use, one for graphics intensive applications), the Mini DisplayPort (which replaced the full-size DVI display connector), and larger hard drive and RAM capacities.

The most common repairs with a 17" MacBook Pro Unibody Early 2009 are replacing a dead battery, replacing a malfunctioning left or right fan, and upgrading the hard drive or RAM. The MacBook Pro 17" Unibody (Early 2009) Memory Maxxer RAM Upgrade Kit includes all the parts and tools you need to upgrade to 8 GB of RAM.

Once you've bought your parts and tools, check out iFixit's MacBook Pro 17" Unibody Early 2009 repair guides for step-by-step instructions on how to make the fix.