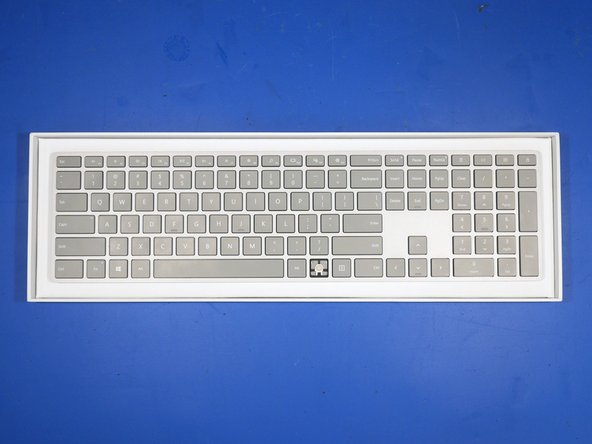 The surface keyboard is one of Microsoft's attempts at bringing a laptop-style keyboard to the desktop space. Originally introduced alongside the Surface Studio, this keyboard has been equally championed and hated by various technology reviewers. This teardown will provide some insight into the keyboard construction and Microsoft's design decisions.

Man, how rude to use glue for a keyboard! I wanted to open my Surface Ergonomic keyboard in hopes it had JTAG or other diagnostic port that would enable me to twiddle with its brain, since macOS does not believe it is a keyboard but rather just a generic bluetooth HID :(

No problem! I’m glad you enjoyed the teardown. I sure wish they used screws instead of adhesive. It would make retrofitting a backlight far easier.

If I discover anything interesting from probing that 10 pin unpopulated header I’ll be sure to provide an update.

hey Anthony, i have the same problem with one of the keys (the big “0” on the numerical part). Did you find a solution for fixing the “key tabs that hold the key” that sheared of of mine as well?

Hi Bas! Unfortunately, I did not attempt to repair the broken aluminum key tabs that hold the key in place. However, I can point you in the right direction if you want to get creative and try a DIY fix. Carefully pop another key off your keyboard with something wood or plastic (like a plastic spudger) and analyze the metal locking tab design Microsoft implemented. Find another piece of aluminum of the same thickness and carefully cut out that tab shape. Try adhering your designed tab to the location where the broken aluminum key tab is situated. Epoxy or titanium putty should bond aluminum to aluminum. I would use a toothpick or sewing pin as an adhesive applicator. I think you will have success if you take your time and be patient. Good luck!

Thanks Anthony… i will do my best. I was thinking along that way as well, but also about replacing the key with a fully or partially silicon alternative (using a printed 3D mold). I dont mind seeing the repair. I really enjoyed your Salvage Circuitry website and the disassembly of the keyboard. 0 out of 10 for opening?

how to connect this keyboard without a button. I have it with a broken button. someone will be grateful.