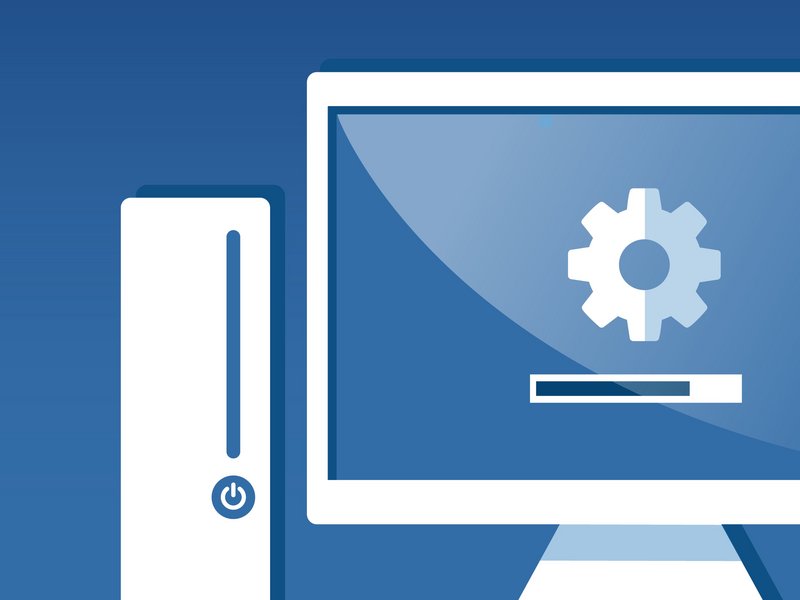 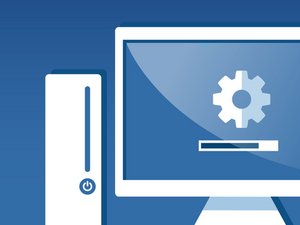 Learn what a PC CPU cooler is, and what it does.

Modern CPUs consume a lot of power as much as 130W. That power ends up as waste heat. In effect, a modern system has the equivalent of a 50W to 130W incandescent lightbulb burning constantly inside the case. That analogy understates the problem a lightbulb dissipates its heat from the relatively large surface of the bulb. A processor must dissipate the same amount of heat over the much smaller surface area of the processor die, typically about 0.25 square inch. Without an effective heatsink to draw away this heat, the processor might literally burn itself to a crisp almost instantly.

Nearly all systems deal with this heat problem by placing a massive metal heatsink in close contact with the processor die (or integrated heat spreader) and using a small fan to draw or push air through the heat-sink fins. This device is called a heat-sink/fan (HSF) or CPU cooler. As the power consumption of processors has continued growing, so too has the size and mass of the heatsinks they use. Even the stock coolers packaged with retail-boxed processors nowadays are often quite large and heavy. For example, Figure 5-6 shows a stock Intel Pentium 4 CPU cooler on the left and a Thermalright XP-120 aftermarket CPU cooler on the right, with a pair of AA batteries shown for scale. 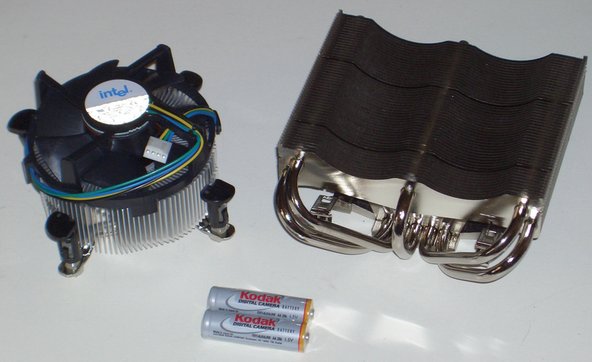 Those things that look like pipes on the Thermalright XP-120 cooler are pipes. Heat pipes, to be exact. Some high-end CPU coolers, including this model, use heat pipes to increase cooling efficiency. Heat pipes operate much like your refrigerator. The heat generated by the processor vaporizes a fluid. The resulting gas rises by convection up the heat pipe to the radiator section at the top of the cooler, where it condenses, giving up its heat to the radiator.

Unlike stock coolers, some aftermarket coolers including this Thermalright model do not include a bundled fan. That's because such coolers tend to be used by performance-and silent-PC enthusiasts, who prefer to choose a fan with particular airflow and noise characteristics. This Thermalright cooler can use a large (120 mm) fan, which because of its size can run relatively slowly (and silently) while still providing a sufficient volume of air flow to cool the processor effectively. In fact, because of their large surface area and high efficiency, some high-performance aftermarket coolers, including the XP-120, can cool all but the fastest, hottest processors without using a CPU fan. The airflow from a case fan suffices to remove waste heat from the cooler.

JUST BECAUSE IT FITS

Do not assume that merely because a heatsink fits a processor, it is sufficient to cool that processor. Faster processors are physically identical to slower models, but produce more heat. Heatsinks are rated by processor speed. For example, a heatsink rated for a 2.4 GHz Pentium 4 can physically be installed on a 3.8 GHz Pentium 4, but is grossly inadequate to cool it. Nor can you judge solely by processor speed. For example, Intel has produced 2.8 GHz Pentium 4 processors using the earlier, cooler-running Northwood core and the later, hotter-running Prescott-core. A heatsink rated for use with a 2.8 GHz Northwood-core Pentium 4 is not good enough for a 2.8 GHz Prescott-core Pentium 4. Make sure that the heatsink/fan unit you choose is rated for the specific processor you use it with.

Heatsink/fan units also differ in the type and size of fan they use, and how fast that fan runs. Fan speed is an issue, because all other things being equal, a faster-running fan produces more noise. For equal air flow, a larger, slower fan produces less noise than a smaller, faster fan. Fan sizes have increased as processor speeds have increased, to provide the high air flow volume needed to cool the heatsink while keeping fan speed (and noise) at a reasonable level. For example, heatsinks for Pentium II processors used 30 mm fans. Heatsinks for early Pentium 4 and Athlon 64 processors typically used 60 mm or 70 mm fans. Some third-party "performance" heatsinks targeted at overclockers use 80 mm, 92 mm, or 120 mm fans. Some even use multiple fans.

In general, we recommend using the CPU coolers that are bundled with retail-boxed processors. The bundled coolers are generally midrange in terms of performance and noise level neither as efficient nor as quiet as good aftermarket coolers, but less costly.

However, if you are concerned about PC noise, a third-party CPU cooler is the way to go. You can spend anything from about $15 to more than $100 on a quiet CPU cooler, depending on the processor you're using and just how quiet and efficient you require the cooler to be. Arctic Cooling (http://www.arctic-cooling.com) makes several models in the $15 to $30 range that are reasonably quiet and efficient. If you're willing to spend a bit more, look at Zalman 7000- and 7700-series coolers (http://www.zalmanusa.com), which are in the $30 to $45 range, and are extremely quiet and so efficient that some models can be run fanless (and therefore completely silent) with some processors. Finally, if only the best will do and you're willing to pay $60 or more for a CPU cooler, choose a Thermalright (http://www.thermalright.com) model and add one of the fans recommended by Thermalright.

USE WHAT IT CAME WITH

We generally use the thermal compound or phase-change medium that is provided with the cooler. (AMD in particular is very specific about which thermal transfer media are acceptable for its processors.) When we reinstall a cooler, we generally use Antec Silver Thermal Compound (http://www.antec.com), which is inexpensive and as good as or better than anything else we've used.

The Wrong CPU Cooler Can Kill Your Motherboard

Choosing the best aftermarket HSF is not trivial. Verifying that the cooler is rated for your processor is just the first step. Specialty coolers those that provide high cooling efficiency or low noise levels, or both are typically large and heavy (and expensive).

Size is important because the space around the processor socket is often cluttered with capacitors and other components that may prevent a large cooler from being seated properly. More than one system builder has learned to his dismay that a cooler that appears to fit may upon being clamped down bend, damage, or short out nearby components. We have never understood why most third-party CPU cooler makers don't provide motherboard compatibility lists ( Zalman, for one, does). In the absence of such lists, the best way to avoid damaging your motherboard is to verify visually that all components will clear the cooler before you clamp it into place. If it doesn't fit well, that's another good argument for buying from vendors that have good return policies.

Weight is important because Intel and AMD specify maximum heatsink weights for which the retaining brackets for their various processors are rated. Many specialty CPU coolers exceed the maximum allowable weight sometimes by large margins which introduces the ugly possibility of the cooler breaking free from its mount and rattling around loose inside the case. This is an issue with any tower system or other PC that mounts the motherboard vertically, and is a particular danger with portable systems, such as LAN party PCs. AMD Socket A systems are particularly prone to this problem, because the cooler clamps to the CPU socket directly rather than to a retaining bracket that is secured to the motherboard.

The best solution, if you must use such a heavy cooler, is to choose one that comes with a custom retaining bracket rather than depending on the standard motherboard bracket. It's also a good idea to transport such systems in a motherboard horizontal orientation to reduce the risk of breakage during transit.

Also, a missing thermocouple connection to BIOS can destroy your processor. I know - was expensive.