The frame resides permanently in an externally accessible drive bay, and is connected permanently to power and to the ATA or SATA interface. The carrier assembly contains power and data cables, which remain permanently attached to the hard drive. The rear of the carrier assembly contains a custom connector that routes power and data signals from the PC through the frame and carrier to the hard drive. The connector that mates the carrier to the frame is designed for durability, and is typically rated for thousands of insertions and removals.

These devices are simply physical modifications that allow internal hard drives to be inserted and removed easily. The computer sees the drive as just another hard drive because it is just another hard drive. Frame/carrier assemblies are available for any hard disk interface, including PATA and SATA. More sophisticated units support such functions as hot-swapping, sparing, and RAID, if your host adapter, drivers, and operating system also support those functions.

Figure 9-4 shows three components of the StorCase (http://www.storcase.com) DE-100 frame/carrier system. The assembly at the top is a frame with an empty carrier partially inserted. (In actual use, the frame would be secured within a 5.25" externally accessible drive bay and the carrier would contain a hard drive.) The carrier provides standard power and data cables, which connect to the hard drive contained in the carrier. Below is the rear side of a second carrier, showing the proprietary connector that joins the carrier to the frame when the carrier is fully inserted. The rear of the frame provides standard connectors for power and data cables. 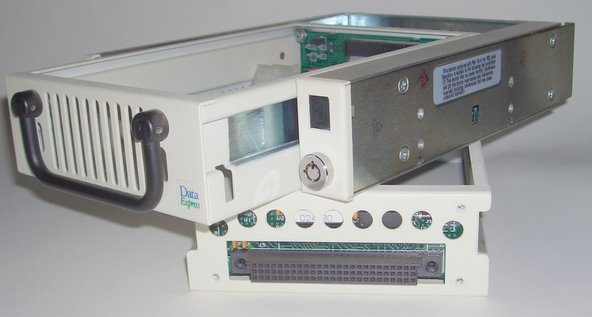 Similar frame/carrier systems are available from other manufacturers, including Kingwin, Lian Li, Vantec, Vision, and others. (A frame from one manufacturer is almost certainly incompatible with a carrier from another manufacturer, even if the carrier appears to fit the frame.) Some carriers include one or two front-mounted cooling fans, which are often rather ineffective and sometimes quite loud. Fortunately, it's usually easy to disable these fans by unplugging their power connectors. Other models use a rearmounted fan, which is usually reasonably quiet and effective.