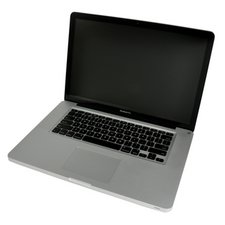 I was using my MBP last night, with it plugged in to the AC adapter, when it shut down spontaneously. Funny, I though -- pressed the battery charge indicator button and nothing lit, and the adapter LED was dark also. Hmm, maybe the adapter wasn't plugged into the wall all the way (or maybe it's given up). Tried unplugging and plugging it back in, but the adapter was still not lit. Pressed the power button and it started booting, but shut off again after maybe 4 seconds.

From that point, nothing. The adapter is good (we have two, and they both work on my wife's MB). After using the adapter with my wife's, plugging it into the MBP results in the orange glowing LED slowly fading.

No sounds of any sort on pressing/holding the power button or resetting the SMC -- completely dead.

Tried disconnecting the battery and then resetting the SMC to no avail.

Any thoughts from the experts if this is the DC-in board vs the logic board? 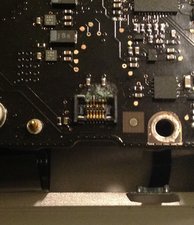 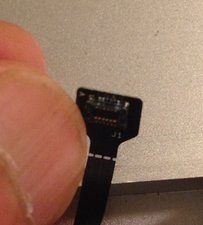 Try cleaning the Mag safe connectors of you see some junk on them. Otherwise it could be either the DC in board or the logic board. Does the DC board look damaged? If not then its' likely the logic board.

The MagSafe contacts are nice and shiny. It looks like I'll need to remove the DC-in board to inspect it (all the interesting things are underneath), which means removing the logic board as well -- correct?

Sorry to say it's under it and yes you do need to pull the logic board out as well. Give both a good look over for any damage and make sure to use ESD protection.

OK, got the logic board out -- that wasn't too bad actually (but everything is so tiny -- my eyes aren't what they used to be).

The MagSafe board looks OK, but I've swapped it anyway with a second one I have acquired.

There is a small amount of corrosion on the battery indicator ribbon cable connector on the logic board, and also a little on the ribbon cable's connector as well. I'll try cleaning those tomorrow -- but would that cause more than just failure of those indicator lights?

I've added two pics of the corrosion to the original question.

Swapping the MagSafe board did not help (although there is a slight chance the board I swapped in was not good as it came from a MBP that suffered a water spill).

Cleaning the corroded contacts also did not help.

My repair options (from Apple) are:

Happy to here your system is alive and well!

Please rate & acknowledge your issue has been resolved.