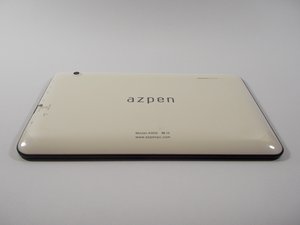 The Azpen A909 tablet, released in 2011, has a 9-inch LCD touchscreen display and operates on the Google Android 4.4 system. Repair for this device requires prying tools, a small screwdriver, and possibly a soldering iron.

Recently I noticed that the battery on my tablet doesn't seem to last very long after being fully charged. I remember seeing that the fully charged battery is supposed to last for around 4 hours, but I'm lucky if it lasts for half of that and sometimes it's even less.

Is there anything I can do that doesn't require replacing the battery? Or is that my only option?

If the battery is no longer holding a charge, it may be time to purchase a new one. The A909 takes 3.7V 4000mAh batteries.

If the battery is completely depleted, charging it through the USB might not work. AT this point, only plugging it into a wall socket will achieve any results.

More information is available on the troubleshooting page.

There are a few things that can help your battery last longer before needing charged again. One way is to disable things such as GPS that require the phone to run background tasks to keep the location and other things updated. Also programs like Facebook, email apps, and others that also run background tasks to sync information and keep things current and up-to-date will cause your battery to drain quicker. So by changing these apps settings to where they are not constantly trying to update themselves will definitely help some. If you have already done this and it has not helped it may be time to replace the battery.

Lithium ion batteries will also hold a charge longer and have a longer battery life if they are used with the correct charging equipment and chargeed properly. when charging a lithium ion battery you do not really want to leave it on the charger for long periods of time. These batteries actually last longer if you plug them into a charger at about 10 to 20 percent battery life and let them charge to about 90 percent and then remove it from the charger. Overcharging and also letting the battery discharge too much will affect its battery life. So if you do replace the battery make sure you are using the correct charger and try not to over charge the battery or let it completely die often. I know sometimes this can't be avoided but the more one does avoid leaving it on the charger or letting the battery die the longer the battery will last. Although even when charged and taken care of properly these batteries just never seem to last as long as one would hope, especially if they are used often.

If your battery is ok,Big game and small run applications. These applications are battery killer, will quickly consume battery power. In the non-necessary to turn off wireless communications, such as Bluetooth, wifi, etc. Find the manage power of the program. Andrews optimization guru-saving management will provide a list of programs into the mobile phone power, find power-hungry, over or deleted.www.iboxfix.com