The Wii U is a video game console paired with a handheld device made by Nintendo that allows users to play games on the GamePad. Repairing the console is straightforward as the device is very modular.

Can the Wii U MCM (CPU/GPU) of a Wii U be replaced?

I have a Wii U with the following problem:

I ordered a Wii U MCM chip (were still soldered on part of the motherboard) and did the following:

- soldered back reballed MCM chip in right direction on motherboard

Here you can see a picture of the second hand Wii U MCM chip soldered on the motherboard : 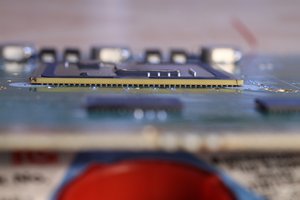 Reassembled Wii U, but Wii U does not turn on.

The red led keeps red while everything is connected in the right way.

I now wonder if it is possible to replace the MCM chip, or that it is bound to the system ?