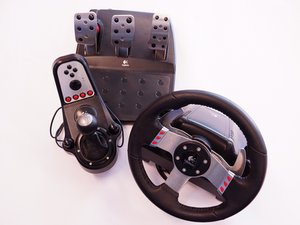 Released in 2010, the Logitech G27 is an electronic steering wheel designed for Sim racing video games on the PC, PS2 and PS3.

Plug in the USB cord and nothing happens .. the wheel should move both directions. everything else works fine. it seems that the power it's getting to the motors. i viewed a video that it my have to do something with the circuit board 12R. any ideas?

I think it is something between the big chip (should be a mikrocontroller) and the motor. The motor is not starting and until the calibration isn´t done, no data from the X-Axis will be send.

I have checked the resistors mentioned in the video. Both are fine. I will check the others later.

The cover was warm, when the wheel broke. So i will add a cooling.

I have repaired mine. After spending several days on just searching the Internet, i can say that there isn’t “the way” (see at the end) to repair this. For searching the error you should have a bit knowledge of electronics. The following is for G25, but should also be for G27 and G29. This is a collection of things that can be the reason the wheel is not working. You should check in the order i have written it.

Maybe some one can translate it in a better english than mine.

Rdini: Can be the MOSFETs

Dodger 76: Can be the motors

Sugar Bomb: You can’t calibrate it manual. If the encoder fails (~ 0,1 s) the calibration is stopped. Like you have found out: You need a power supply.

Magnus Buinevits: Can be the Encoder.

So this is not the same problem. I think every one of your G25/G27/G29 has a diffrent problem.

what mosfets substitutes are u used ?

Thing is I've opened up the g25 countless times now and after that first post I found I needed a power supply so got that and it's worked for about 8 months then sold it to my mate and it just stopped working when I got to hit house, I used it 10 minutes before we went over and the encoder disc looked fine, no cracks and it was still on the shaft. But it does pulse for 0.1 and the light on the shifter just start blinking.

the solution is you have to make sure that the port is USB 2.0

had this problem before

Personally with my PC my wheel doesn't care about USB 2.0 or 3.0 but I just us 2.0 to be safe and the wheel has been working a dream since I got the necessary power supply it's meant to come with.

Before posting such solutions please make some research or testing. Such postings dosn't help anyone. For Sugar Bomb Gaming and me this wasn't the solution.

@luckybear...well it's funny you are going out of your way to make this point, prob years old now, but i recently had this issue, and logitech themselves replied that the device is NOT compatible with USB 3.0, and frankly i can't figure out the reason if this is wrong, and iv'e been trying to solve it for months the guy going on about circuit boards etc...is way of...this is a config problem be it hardware or software, of that i'm sure

Hello, I have a similar problem, I wanted to ask if they could solve.

Did you determine the issue? Having the same problem.

Hi there, sort of similar problem, I enclose a Link to a video, maybe someone konows what is it going wrong.

Without force feedback everything seems fine, but the wheel only turns slowly, never gets hard, voltage out of the amp is 41.6 v, isolation of the cable is good.

I'm have the same problem to but with my g25 and when i turn the wheel to calibrate it for the steering in a game it doesn't pick up the x axis of the wheel, and my clutch pedal does work either. if someone find a way to fix it that would be awesome!

Same kind of problem, but it's pulsing ever so slightly, not enough to move itself though. Something about the encoder seems to be broken, did the exact same thing when I removed the cable connecting the optical encoder.

has anyone found a fix for this. I am getting very frustrated with this. been trying to fix it for 3 days now and I’ve tried everything the internet says but nothing works

I have a g27 wheel...i have verified my wheel,my optical enconder and g27 and all motors are ok...my pedals,shifter and all buttons are working properly...Do u have a ideea what s the problem?The wheel don t calibrate when i start the pc and don t work anyway....but butons and all are working...maybe be the power adaptor? I had lucky one time to calibrate properly but when i restart the windows this has stopped working..(I kept putting and unplugging it and it started to turn)...the power adaptor i think it it..the green light from the shifter is on 50% and must be 100% when calibrate....i don t know why all working..maybe it doesn t have enough power i think..i don know Say me one ideea if u want.Thank you so much!

If the wheel starts to turn every time you plug in the power adapter, then it could be the encoder, the chip or something between.

If the wheel dosen't start to calibrate, then there is something on the power side. From power adapter to motors. Or something between.

Thats the first step to go.

I think I'm having a similar problem with my old G25 (sold it to a mate then it died a week later), it jolts a little a few times when it gets plugged in but power light keeps flashing, no force feedback, don't think the buttons work but can't remember but my mate said he saw a flash from inside the wheel and some sound right before everything died

Hi. I had some problems with my G29. Time ago started to smoke the engine on the right side, the one without encoder. so i decided to buy a new one. I mounted it and then i’ve reassembled all, but the wheel is not working again. It only make the blinking light like when there’s only the usb connected but not the power supply.

I tried changing the 24V power supply (yes, for G29 is 24V). Nothing changing. Also the pedals are working but not the ffb or the wheel axis.

What can i do?

I'd say make sure you've got power to the motors, if not trace up the circuit board to the supply because you may have cooked the board. Also NEVER, EVER! use the $@$*!& ebay supplies that say they're for g25-29 and are 24v 2a, you want as close to the original 1.75a if you need more help just add me on discord and say your the guy with the cooked g29, Sugar Bombs #8689

Hello! Having the same problem. Simply stopped working out of the blue. Connecting the USB cable does nothing. No lights.

Found the USB connector port on the motherboard's side to be shorting red and grounds out (cable is 100% fine, luckily). R12 resistor was burnt, so I replaced it with a structurally stronger one, but with definitely similar stats. Now when I plug the wheel into USB, that same resistor gets extremely hot.

Help really appreciated, as buying a new motherboard is out of the question and definitely looking into proper repair.

Hopefully it's not too late.

UPDATE: Bad news. Got news that the controller on the board is shorted and apparently can't be repaired/switched out. New motherboard being pretty much the only way to go.

Hi i have a logitech g27. My problem is when i try to put it in my pc and power supply nothing work no conection from windows and nothing led in gears i have measure the volt and its fine 24V and the usb voltage its fine i cant find any solution in my problem.