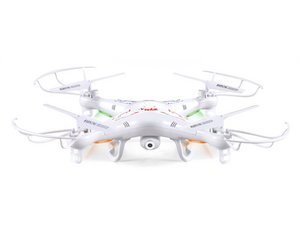 The Syma X5C is a four-channel quadcopter with a built-in camera.

How do I fix my Drone that won't lift off?

I just got my Drone a couple days ago and I have been busy so I could not take it outside to see how it works but today I finally got the time to take it out for a test drive but I let my sister try flying it and she allowed it to slam onto the ground from a high altitude and now the propellers are spinning but its not taking off. How do I go about fixing it?

Check all the props for damage and debris around the shafts(string and things like that). Other than that make sure you have a fully charged battery

I have fully charged the battery and it still isn't working. I am going to check the shafts for debris later today and I hope that fixes the problem.

My drone just will turn into when it's off

What does it not turn into when it is off? That question makes no sense! Is it supposed to turn into a pumpkin or something?

My drone is a D X 3 and i got it a day ago and now it wont light up even though I charged it for a couple of hours.

I had the same problem after switching my propellers out, my drone (X5SW) didn't want to lift and kept tilting to the right. After some searching I found that if you don't have the propellers in the right sequence, that you're not going anywhere. I switched the props to the picture on the box and low and behold, I'm flying again!

I had a problem. my all props are placedright but it is still going in on side

gorav malhotra did you get it fixed?

I see new props have the A-D markings on them but can't find letters on Dronium 3 arms. Wont get off ground and revs up motor very strong. No support for this either on their site. What else to be expected.

lay one of your props on your table in front of you, just simply set it there by itself longways not sideways the front half of the prop should be angled down to the left the bottom half to the right.... this is an "A" blade.........the rest shuold be easy

On a lot of these toy grade drones if you get hung in a tree and the transmitter is still throttle up you are going to burn out something. I had issues when I was new to the hobby, so I feel your pain.

Mine did that and I had a bent shaft on motor. The next time it happened the plastic gear was wore. Both times I had to replace motor...

If the motors are spinning up, it is likely an issue with the flight controller or ESC's. Have you tried calibrating the gyros? Turn the copter on and place on the level surface, I believe it is both sticks down and to the right (might be left, varies from manufacturer), hold and watch the LED's on the bottom flash, once the flashing stops it should be calibrated. I have seen that happen before after taking a crash. If the gyros don't agree with each other it won't fly.

Do the motors actually respond to the throttle up to point? Meaning you can spin them up and down a little bit just not enough to take off? Or is it just spinning in Idle when you turn it on?

Also, I'm not sure if it was a question or just a comment, but you should always have 2 motors spinning clockwise, and 2 counter clockwise.

It still doesn't work and just when I turn it on

my dronium one want lift.... slide to the right in a circle

I have one motor that doesn't work until you turn the model upside down. Any ideas?

I press throtle trim button on my hexacopter remote, after that 4 motors are spinning up and other two spining down and it won't take off when I speed up it starts jumping from front but other propellers are moving in opposite direction and they pushing air to the top not to the ground

How do u recalibrate the gyros?

Props are marked A and B. Make sure they're mounted on the correctly marked arm of the quad. Recalibrate the transmitter

i put on 2 new propeller my dronium one arm are not mark a&b, so where do i place (a) left or right front

Cant find A or B on drone arms just marked on new blades I put on Dronium 3 and now wont fly off ground. Revs up very goo tho...lol Lack of company support :(

Motors cost nothing a few pounds for a set of 4 . If u crashed it u more than likely damaged the motors or control board. Check all the solder points are ok and no wires are detached. If thats ok and the motors rev up and respond to transmitter power then the board is naf. U can bypass the power control by placing a small blob of solder on the board in the right place. This bypasses the gyros and enables normal flight again. The gyros perm set at default so no need for calibration. Email me if u want to know where and ill send u photos stormx29@googlemail.com

If you don't ever have to recalibrate the gyros then why do most instruction manuals show you how. Is this just something to do that has no effect? Maybe they tell you that just for poops and giggles. Give me a break.

Hi can you email me the pictures of where to put the blob of solder at home I drone my email is JJcool16758 @ gmail.com

switching the props around worked for me. The quad now takes off and fly's correctly.

I have FOUND the answer to your problems (1) You might have the propellers in the wrong spots! I lost my drone for a week then someone found it and the wings were TERRIBLE and so I cleaned them. I put them back on and turned the drone on and it wouldn’t fly. You have to check the propellers to see which number it has on it.

Hold the drone from the bottom and lean it every direction, you will find the weak motor. If one motor is weak it will pitch to one side and only hover as high as the weakest motor will let it. Drones fight to stay level, so by tilting the running drone from rotor to rotor, you can tell if one is fighting back less than others. Replace that one.

My drone turns on the 3 seconds beeps once and does nothing after that.Why?