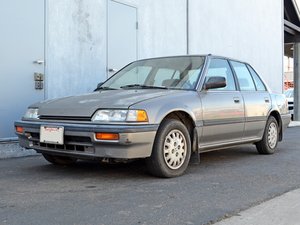 1990 honda civic dx hatchback. Starts and runs but when I push the clutch in it revs way high. Also idle speed is really high as well. I have changed the oil pan gasket but I don't know what else ,other than a clogged pcv valve, could have caused it to blow.

You may want to check the EGR valve If the diaphragm is leaking it will cause an increase in Idle speed. Pull the vacuum line from the EGR while the car is running if the idle speed stays the same the valve is faulty if it changes speed its ok. Next what blew ? You said"I don't know what else ,other than a clogged pcv valve, could have caused it to blow". The oil pan gasket blow out from the pressure from an clogged PCV valve? Did the valve cover gaskets blow as well ? Or was it something else that blew?