Please read in it's entirety before suggesting actions, I've tried everything I can think of (and I do this for a living)

So I client of mine has brought me a seemingly unsolvable issue. While he was attempting to disconnect the battery to install new RAM his screwdriver slipped and he stabbed the logic board - fried the SMC. So I ordered a logic board. The replacement board will not detect the battery, sort of - TechTool can detect the battery, says it's charging and healthy and when unplugged from power it would stay on about 10 seconds, then turn off. So the battery was technically supplying power. Went through the usual steps, reset the SMC more times then I can count, Reset the NVRAM, tried multiple known good batteries, nothing. So I figure it's a just a bad board, send it back.

I'm now on the second board, it will not even power on with the battery connected (charged or otherwise). Repeated all the same steps as before, nothing. I also replace the MagSafe board just in case. I've replaced dozens of logic boards over the years and only ever encountered 1 bad one before. And I'm at a loss.

There is only one thing out of the ordinary, and that is the 3rd light (from the front) on the battery indicator is on, and none of the rest are.

I'll readily admit that I can't know everything. Do I just have two bad boards in a row, or is it something new and bizarre? Thoughts anyone?

What happens when you disconnect the battery checker? 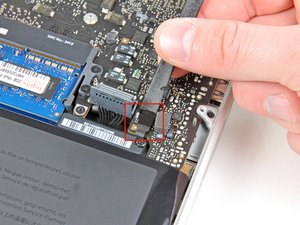 And do a SMC reset, any changes?

Yes! It works! Thank you! It doesn't look like the indicator is going to but that's unimportant.

Could you provide a technical explanation for why that would cause this?

Thank you again! I've been struggling with this for almost 3 weeks!

Happy it all worked out! Often they short out causing odd problems.

Thanks. I actually have like a dozen of them, but I've never run into one causing problems before. Thanks again.