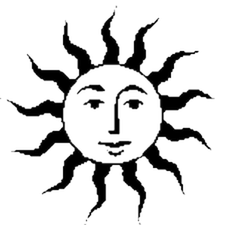 Is it fixable? airport cable/something has melted a bit

So it started almost a year ago... something was off with my wifi, but it would disappear after applied pressure on the airport cable ends and i also added some thick tape stuff to make sure the pressure would last. Now a week ago or so, I just couldn't make it work so I opened up my mac to find the end bit of the airport cable stuck on the logic board and the rest of the cable hanging loose! I didn't really know what to do, so I just used some masking tape to secure the cable and the end cable part which magically enough worked. But today it simply would not work, it said that there were no wifi hardware installed and no bluetooth either so i opened it up, and as you can see on the picture below, something had melted a bit. I tried fastening it again with masking tape but it still did not work. I ended up removing the airport cable all together, although I could not remove the end that was stuck. (image link: http://imgur.com/a/D1YSx)

My question is whether or not this is fixable and/or worth it?

I am contemplating buying a new macbook as this one has had a lot of problems: the battery doesn't work properly(been through 3 the last year or so), the graphic card has been replaced twice(during a period of 6 months) and now this. It's just that everything else works fine, it's not slow at all(not the fastest either but it doesn't lag) it doesn't even overheat that easily and works better than most of my classmates MacBooks... maybe because it's 15" and not 13"? anyways, any help would be greatly appreciated

Also it has 2,2 GHz intel processor and 512 MB and it runs macOS Sierra like a charm.

Thank you in advance! :)