Apple's operating system for its Mac desktop and portable computers.

I did the Sierra upgrade on a couple of MacPros 4,1 and it has worked excellently, after I did a firmware update patch to get it to read as a MacPro 5,1, so I am very optimistic on doing it again. At the time I did it last year, it appeared that it couldn't be done on the 2008 MacPro. But, after watching a couple of videos, right now it appears I will not have to do a firmware update.

I did my first install of 10.13 last night on a 2012 13" MBP without issue as expected but really have not looks at it yet. I did open a new install of MS Office 2011 which had reports that it was not going to work but so far have seen no issues.

Here's the patch tool by dosdude for High Sierra, Iused his former patch to do the Sierra upgrade. It also tells you how to install it. It is reported to work on theses unsupported machines:

Machines that ARE NOT supported:

EFI and Firmware update from 4,1 to 5,1 for Sierra Upgrade Solved

I have had no issues with this installation for the last year. I just booted this same machine from a High Sierra install on an external drive and it is what I'm using at this moment with no apparent issues. Warning I went to install it on an internal SSD and it says it wants to do a firmware update. Since I already did a hack firmware update, I'm afraid to do this yet until I know more about it.

I got the same warning regarding firmware upgrade, I think it refers to upgrading your already installed 5,1 firmware. I needed to re-start 5-6 times before the firmware actually installed. Once finished my Early 2009 Mac Pro is now running High Sierra.

A side note - I am using a Sonnet Technologies Tempo 6Gb/s SATA PCIe 2.0 Drive Card with dual Samsung SSD drives, ORICO USB3.0 4 Port PCI Express to USB3.0 Host Controller Adapter and a AUKEY USB-C PCI Express Card. All of which help keep me up to date.

Had you preformed the 5,1 firmware hack update and installed plain Sierra before going to High Sierra? What did it flash the firmware to? How did you do the download and installation. I was using an external drive with High Sierra already installed on it and my machine was booted from it.. The I looked at installing to a drive bay SSD. I do have a PCIe USB3 card in it right now.

I did the original firmware fix to run Sierra.

When you say the original firmware fix, exactly what are you referencing? Did Apple have a fix?

EFI and Firmware update from 4,1 to 5,1 for Sierra Upgrade Solved

@johnnygto Thanks for letting me know. What firmware does it show now? Did you install from the startup drive or another source?

Rob, any update on this?

Yes, it just works ! Makes Apple sound foolish to leave customers in the cold after an update. If Steve Wozniak hears this he'll feel ashamed :( ...

Because of Final Cut Pro X 10.4.1 I needed high sierra. So I just did it. There was a problem with the graphics card (macOS graphic drivers where not recognizing the card and I had to use NVIDIA driver).

I did the firmware update but I didn't use the patch (the link above).

Everything is working well so far (I don't know about the wi-fi card cause I ain't got any).

The Model Identifier is still 5.1. 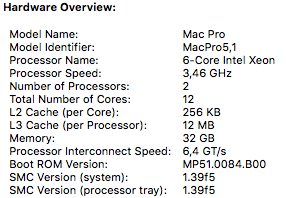 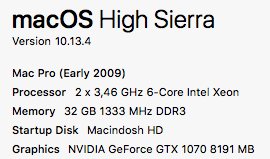 I have been running High Sierra on my 3,1 2008 8-core Mac Pro since September 2018, using DosDude1's installation. Has been relatively problem-free, though sometimes feels slower than El Capitan. One fault that took me a while to fix was random logouts for no apparent reason, but I pinned it down to a conflict between my GPU's. I have an unflashed EVGA Nvidia GTX 760 which performs well, and gives me CUDA in Photoshop and After Effects, but when problems do arise it's handy to be able to see the EFI boot screen, which I can't do with the PC Nvidia card, so I left the old ATI Radeon 2600XT installed powering a small monitor. This never caused any problems in El Capitan, but seems to be the cause of the random logouts, as they haven't occurred since I removed it. I installed a later Atheros Wifi card shortly after buying the machine, as the machine came without Wifi, and there have been no problems with High Sierra and WiFi.

DosDudes Patch Updater allows AppStore system updates to run. I ran a security update in November without a hitch, but since running the last update earlier this month the system has been prone to very slow system boots and boot freezes, so I have made a USB installer using the latest download and patches and intend to re-install the system.

Thanks so much for this. Please keep us apprised of your progress.

Re-install went OK eventually and the machine is much more well behaved, although I have to sort out the fix for the OS not recognising the latest (already installed) Nvidia driver and reverting to the Apple supplied one. Two points people who are having problems installing on unsupported machines should bear in mind - 1 Make sure SIP is disabled before installing, and 2 Do not let the machine automatically boot from the newly installed system without first running the post-install application. If you let the auto-restart proceed it will fail to recognise the system and the disk will not subsequently show up as a startup disk. It means you have to keep an eye on the install and as soon as it completes hold down option and start back up off the installer flash-drive to run the post-install application

currently i have only 3.33 ghz quad core. Although i do have another of the same CPU. I just havent gutten this machine yet to see if it has a built in board for a second CPU. However, lets say i dont even bother with it. I have an Nvidia 970 GTX and 12 GB of ram (currently). Do you think this is sufficient on my Mac Pro with the 5,1 firmware?