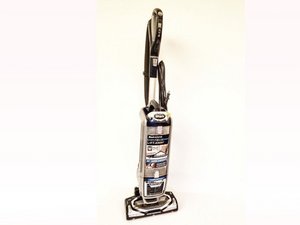 Shark Rotator Powered Lift-Away XL Capacity, model NV755. It can convert from a push vacuum to a hand-held vacuum. Repairs and troubleshooting found here may also be applicable to models NV652 and NV752.

My wand won't release. How can I get it out?

The wand for my Shark Rotator Professional won't release. Is there something I can do to get it out?

My sharks hose won’t stay down, it keeps slipping out of the place it’s suppose to stay in. Please help

First, unwind the cord from the machine and try to pull the wand again.

It is poorly designed, in that if you have the cord wound on the machine, it ties the 2 parts of the vacuum together.

If this doesn’t work, look at the space between the chrome pipe and the white plastic where the 2 pieces come together.

If the space isn’t even on both sides, the unlocking mechanism won’t work. Apparently there is just enough space where it will stick in and not come out. if it isn’t properly aligned.

You can try hitting it with your fist to push the larger spaced side in more, or if that isn’t enough power, take a small hammer and a block of wood and tap on it gently until it moves into the correct space.

A Duh! moment for me. Unwind the the cord, so logical and it worked.

Unwinding the cord fixed it for me too. I just bought this vacuum a few weeks ago and didn't realize this design flaw.

Thank you so much! I feel like a dummy. Unwinding the cord worked

I feel sooooo stupid! My husband and I both have been fighting for weeks to get the wand out....and for some reason only doing it before we plugged it in! Took the cord off the wand and it came out

Worked for me. Just unwind the cord. Thanks.

I don't own this, but my research found this:

Twist the end of the telescoping wand clockwise and then counter-clockwise while keeping the button depressed.

Pull the wand off the hose while twisting it. Release the button once the wand is free of the hose.

Place a sheet of newspaper on the floor or carpet. Collapse the telescoping wand. Hold the hose so that the wand is facing down, over the newspaper.

Place an end of the included plastic straw in the nozzle at the end of the lubricating spray can. Shake the can for five seconds.

Spray a sustained burst of lubricating spray around the seam where the end of the wand and the hose meet. Remove the can once you have circled the seam.

Keep the hose pointed down for two minutes and then grip the end of the wand with the other hand.

Unplug the vacuum cleaner's power cord from the wall outlet. Twist the section of the hose connected to the socket on the vacuum counter-clockwise to remove it.

Collapse the telescoping wand, followed by collapsing the hose. Hold the two horizontally with the open end of the hose facing left and the wand facing right.

Press the release button at the end of the hose next to where the wand is, providing there is one, with your left hand. Hold the hose steady while twisting the end of the wand away from you with the other hand.

Continue to twist the wand while pulling it toward your right. Stop twisting the wand once it comes off the end of the hose.

Release the hose button, if there is one. Return the hose to the socket on the vacuum cleaner.

mine wont stay back in what am i doing wrong?

There are two types of wand release. The upper and the lower part of the wand. The lower one has a release right behind the handle of the wand. It has wand release written right on top of the button. If there’s nothing broken beyond this button it should come right off. The upper wand release is in front are the vacuum right below the handle. Press the button and lift the top handle out where it’s very easy.

The other button you mention is simply to release the very top piece, the wand will still be in the vacuum.

I assume you have unwound the cord and that isn’t your problem?

The next thing to do is to grasp the chrome part of the wand, hold onto the main part of the vacuum and try to twist it slightly.If you have someone else to hold it, so much the better. If it isn’t the cord, in my experience, it is just ever so slightly out of wack where it connects on the bottom. Try twisting one way, then the other and try the release button again.

I have same problem and looks like there is no solution!!

Unwind the cord first, then pull the wand.

how do you get it to stay back in mine wont stay in after i take it out???

I had this same problem too with the lift away… after reviewing different suggestions here…. I unwrapped the cord first, then released the tube. Works fine now. ?‍♀️

When I chatted with Shark, “Robert” wanted to know the model number, serial

number, where and when I bought the vacuum (Rotator Professional), and what

I was wearing at the time. I think he was stalling because he has been

be readily remedied. Ultimately, he told me I needed a new body and Wand.

I told him he was nuts.

The button went in and out, but the Wand remained stuck. Problem: the Wand

was not perfectly centered. Frank Zappa is the Mother of Invention. I used

a hammer. If you decide to bang the Wand (he said), hit the plastic not the thin

chrome metal because it will dent easily.