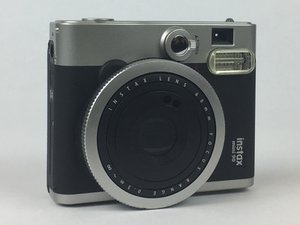 This instant film camera, also known as the Neo Classic, was released by Fujifilm in Fall 2013 under the model number 16404571. It is silver, and comes with the choice of black or brown accents. 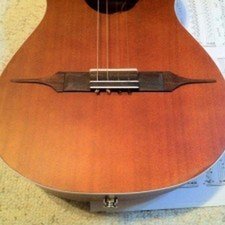 Any idea how many interlocks are in the Instax Mini 90?

Bought an as-is Instax 90 someone’s child got to.

The battery and most of the contacts cover are missing. I can see there is an interlock lever inside to check for a film pack. There is probably a door closure switch, also.

Before I spend money & time replacing the battery contact assembly, I want to think about what else is in there…maybe someone here knows….

I powered it up on a bench with a current limited DC power supply, holding DMM probes like chopsticks against the battery terminals. The lens extended when turned on but the camera drew a lot of current…after a few repetions (I put masking tape over the ‘film pack present’ interlock switch and also the two ‘scissors’ mechanisms that hold a film pack flat against the back of the camera interior) current dropped significantly and display and modes look normal. Of course (-) indicates 0 exposures left in the non-existent film pack.

So it might work if I bought a battery & film. Duct tape until I can find battery cover parts (e-mailed Fuji).

I am still curious how smart (or dumb) the camera is if the lens were removed…slim chance of it not objecting.

I am leaning toward Dave Rollans’ method of reloading film back sheets into other cameras to expose & returning to pack & Mini to develop (in a changing bag). Not exactly ‘instant’ but easier than hacking other film holding mechanisms onto the ‘90.

I think Elliott & the USF Tampa team might know more, but haven’t figured out contacting them.