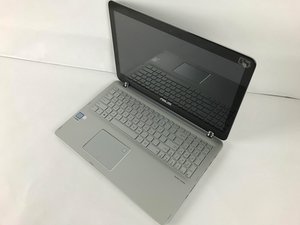 This Asus laptop is a 2-in-1 touchscreen laptop. It can be identified by its model number: Q504UA-BHI5T13.

How do I replace the keyboard on my asus q504uak laptop?

How do I replace the keyboard on my asus q504uak laptop? I need to replace this and I already know what part I need (90NB0BZ2-R31US0) and how to take off the back cover, but after that I am unsure.

To give you a heads up as no one answered you yet. The keyboard is not screwed in but plastic welded in at many spots. The original manufactured wrist pad cover the keyboard keys stick thru had plastic spikes then the keyboard was laid over them and hot pressed to form plastic heads and hold the keyboard in. Some of the Asus once the back is off presents with the motherboard and some have the motherboard on the back cover. You need to cut off all the plastic buttons to release the old keyboard, it looks like a metal sheet with lots of holes in it. The new keyboard is placed over the cut off spikes so to align the new unit in the holes in the wrist pad or top cover. Two ways to stable the new keypad. One is to use tape on the right and left side to hold it in and just put the whole top back in the bottom and re do the screws. Others do the tape to hold the keyboard in and the spikes up as far as possible and drop on epoxy in a dab on several of the spikes. I have even used a soldering iron to touch the spikes while pressing down. I have also heard of a few small wood type screws found on plastic small cars or toys with flat heads being used after using a needle to produce a hole. You may ruin the good keyboard if not careful. In most cases taping in the keyboard so the top can be laid over the bottom with out falling. My Asus although a different model, I removed the bottom a second time and placed a sheet of foam I had from a motherboard packing cut to fit and it supported the keyboard better once put back together so the keys did not push back in.

One thing is to take pictures as you take apart so you get the screws back in the same place as a few may be longer and go in further and ruin something underneath. The flat ribbon cables are stuck to the keyboard by the way but the sticky is reusable. They go to speakers on some or to the finger pad.

Good luck, wish I had pictures of your exact machine.