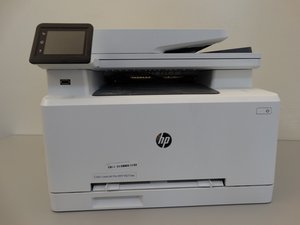 The HP Color LaserJet Pro MFP M277dw is a color laser printer with scan and copy functions. It has a model number: B3Q11A

"Out of paper" but isn't

It is clearly a digital problem because it only affects one computer but the computer and driver seem up to date.